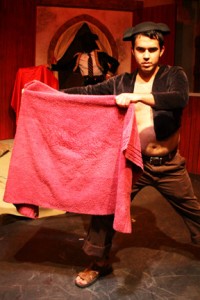 There are a lot of things that can get in between a friendship, but few as impactful as love and ambition. Joshua Mikel’s new play explores the rift these two forces cause between three young people in a small Spanish village.  Atlantia’s star bullfighter, La Muerte Negra, has just died, and Kay Kay becomes more than jealous when his best friend Arturo not only proves La Muerte’s more worthy successor, but also proclaims his love for Kay Kay’s sister, Pumpkin.

In a general sense it’s no surprise how the story ends, but the play often takes some demented turns that would be more satisfying if they were developed more fully. Fortunately, Paul E. Martinez’s complex Kay Kay picks up where the script leaves off. Chris Acevedo and Carla Alegre form the sweet, doomed couple and Megan Tabaque’s La Muerte is a haunting yet underexplored supernatural presence. But ultimately the fantastical, sweaty production finds its soul at the intersection of jealousy and passion.  (Neal Ryan Shaw)