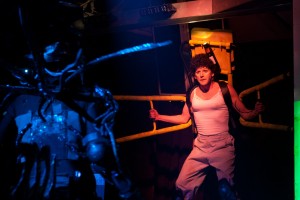 Scott Bradley, co-creator of “Carpenters Halloween,” has created a mashup of the classic sci-fi films “Alien” and “Aliens” with the music of rock-band Queen, complete with puppets, dance numbers and “one giant queen.” The result is a romping, though sometimes uneven, “Sci-Fi Rock ParOdyssey” that explores the androgyny of aliens, Freddie Mercury and action heroes alike. Split into two parts—one for each film—the show gets off to a bumpy start, with some song lyrics and dialogue overlapping and muddling both. Despite an enGROSSing reimagining of the infamous chest-bursting scene, the “Alien” half could use some tightening up, while the “Aliens” half is delightfully captivating thanks to inspired choreography (including a group of sassy aliens), well-parodied dialogue (particularly from Scott Ray Merchant and Anne Litchfield in gender-reversed roles), and a climactic battle scene between the renamed Ridley (Ryan Lanning—an actor with killer pipes) and the Alien Queen herself (Bradley). The nightclub setting helps play up the camp factor. (Zach Freeman)