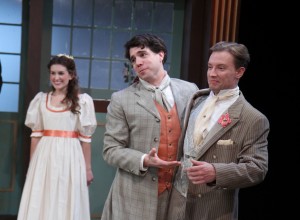 Oscar Wilde, who himself was condemned for leading a double life as a married man and a homosexual, criticized his detractors in a time when one’s public image was of the utmost consequence. In “Earnest,”  a hilarious yet scathing indictment of the hypocrisy of Victorian society, Jack and Algernon, two London gentlemen fond of assuming alternate identities to hide their indiscretions are caught in a sticky web of lies when they both show up at Jack’s country manor pretending to be Jack’s brother Earnest.

The play is ably handled by director Shawn Douglass and his cast, all of whom attack Wilde’s brilliant dialogue with aplomb. Greg Matthew Anderson’s Algernon is a loveable cad. Paul Hurley’s Jack is a sympathetic fop. Linda Gillum, as Gwendolen, and Kelsey Brennan, as Cecily, are both delightful as the two ladies in love with “Earnest.”  David Darlow’s traditional drag turn as the authoritarian Lady Bracknell is sensational. This revival is a little more lighthearted than caustic, but Wilde’s witticisms alone are worth the price of admission.  (Neal Ryan Shaw)