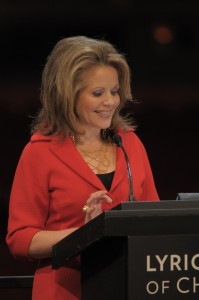 When Lyric Opera recently sent out engraved invitations for a “special announcement” that also included “distinguished guest” Renée Fleming, opera websites were abuzz with wild rumors that the opera megastar would be taking over the company as successor to Lyric’s general director William Mason, who is retiring after the 2011-12 season.

Such speculation seemed bizarre at the very least: why would Fleming, currently the most popular operatic soprano on the planet and at the height of a spectacular career, give all of that up to take an administrative position at an opera company?

As media, donors and the cultural elite of Chicago began gathering late Thursday afternoon on the stage of the Civic Opera House, it was clear that something big was indeed up. The two dailies were given advance word, but the rest of us learned only an hour before the official announcement via email that Fleming had accepted a position as Lyric Opera’s first-ever “creative consultant” for a five-year period “effective immediately,” which also included guarantees of Fleming performing here across that time in a concert appearance, a gala, an opera and a “staged concert opera.” Fleming had also been elected to Lyric’s Board of Directors as a vice president, as had Lyric Opera’s decade-long music director Sir Andrew Davis.

All of this was stunning news on so many levels, particularly given Lyric Opera’s long and conservative identity. Anyone who knows the company history knows that change happens slowly and reluctantly. Of the three general directors that Lyric Opera has had in fifty-plus years, the first was its founder, the second her assistant and the third a company insider who had been involved for most of Lyric’s history. The company has had only two music directors. Only a coup could have brought about such radical change so quickly and decisively, and indeed, as Lyric Board president and CEO Richard P. Kiphart began addressing the gathering, a clearer picture began to emerge.

As most eyes and attention were on Fleming herself—gloriously decked out a few feet in front of the invited guests—Kiphart revealed that since he knew that Mason was planning to retire “around the age of seventy,” and also knowing that a number of major arts organizations had begun major arts alliances with important artists including Yo-Yo Ma and the Chicago Symphony, he and his wife began thinking quietly about who could fulfill such a role at Lyric Opera.

They quickly came up with Fleming, not only because she was “the most famous soprano of our time,” but also because she was “really passionate about opera” and enormously smart and creative. “She knows everybody in opera: stars, directors, agents, general directors, conductors and, when you watch her as the host of the Met broadcasts, she is an engaging interviewer who enthuses others with her enthusiasm.”

Referencing Fleming’s rock album “Dark Hope” from last year without ever specifically mentioning its genre, Kiphart described it as “terrific” and mentioned that Fleming likes “all kinds of music” as he intoned a virtual Crossover Manifesto. “Every business—including opera—needs to look outside of itself for ideas and inspiration.” 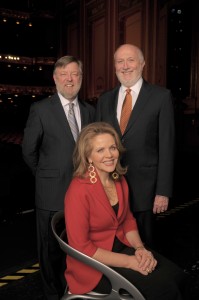 Openly admitting that he got in touch with Fleming “undercover so as not to stir the pot with anyone here at Lyric, so that no one else knew,” Kiphart was reluctant to go into specifics, simply saying that when he did, “she responded very positively.” The two met secretly for lunch in New York and “when I came back and reported on this, it caused some consternation, but it all worked out because everybody loved the idea and everyone ended up seeing that having Renée Fleming as an important part of Lyric is a huge opportunity.”

It was fascinating to watch both Mason and Fleming as Kiphart related all of this, and also to look around the Lyric Opera stage and see what reaction this crossover coup confessional was getting. Longtime Lyric staffers had that deer-in-the-headlights look, but as the full impact of what was happening began to emerge, others in the room who were hearing this news for the first time seemed too starstruck to really reflect upon what a complete game-changer this decision would be for the company.

Fleming herself was given the stupendous ovation that was to be expected, as the woman literally lights up any scenario that she is in, on or offstage. After noting what an “honor” and “extraordinary opportunity” it was to accept this position, she referenced “other singers who have contributed to the art form offstage,” specifically “my friend and mentor Beverly Sills,” but also mentioned Mary Garden, the Scottish soprano who became the general director of the Chicago Opera Association in 1921 and dominated the Chicago opera scene for twenty years almost a century ago. Fleming also mentioned “two other important woman,” Lyric founder and longtime general manager Carol Fox and her successor Ardis Krainik—“also a singer,” Fleming noted.

“After careful thought and lots of research,” Fleming says that she came up with a list of potential initiatives, including “curating a world-premiere performance,” which will take place during the 2015-16 season. “Most of the opera performed in Chicago in 1921 was new, or at least new to audiences,” said Fleming, “but today, new operas have become the exception rather than the rule. Even the standard repertoire has only slightly changed in the last century. The only thing standing between opera as a living entity and opera as an historic art form is the creation of new works.” In addition to this single promised world premiere, Fleming will revisit a role here created for her in 1998, Blanche DuBois in André Previn’s operatic version of “A Streetcar Named Desire,” which will be performed as part of Lyric’s 2012-13 subscription season in a “staged concert version.”

It is admirable that Fleming wants to oversee a world premiere here, for sure, but her own tastes and performance choices have hardly been “new” in any meaningful sense. “A Streetcar Named Desire” was a safe property due to the iconic status of the stage play itself as well as Previn’s crossover credentials and appeal as a jazz pianist, a longtime movie arranger and a conductor. Kiss that with America’s favorite diva, how could you go wrong?

Fleming also expressed that the company would have an “annual commitment to American musical theater,” beginning with Rodgers and Hammerstein’s “Oklahoma!” in non-subscription performances in the spring of 2013. “I believe that it may be time to re-examine the role of an opera house,” said Fleming. “We can broaden our offerings to include more works from our own musical heritage. These works have classic status and are homegrown, so why not add this genre to our annual and standard repertoire? They emphasize our own strengths and also encourage those who love musicals to give opera a try.”

By “strengths,” Fleming means trained singing, of course, as opera singers are not trained actors, and have zero experience speaking on stage, which is why dialogue portions of even operettas need to be amplified in a cavernous venue such as the Civic Opera House. Diction is such that even singing in English—some would argue especially singing in English, since that is such a rarity in opera—opera singers need subtitles to be clearly understood. The kind of dancing required for these roles is alien to the opera house and to opera singers and opera chorus members.

Because of the enormous expense of opera as an art form and the fact that we live in a country where the government does not subsidize opera as is common in Europe, ticket prices are very high at the opera house and even then, cover merely a fraction of the cost of presenting it. Will audiences settle for paying ticket prices that are heftier than current Broadway prices to, in effect, hear opera singers sing the musical portions of musicals?

If musical theater does become an annual part of Lyric’s subscription season as Fleming appears to be advocating, this is not only an enormous shift in the company’s identity, but the opera slots would be reduced to seven per year, less if the company’s recent trend of performing operettas also continues. Since no one else in Chicago is doing grand opera and many companies, venues and presenters already offer quality musical theater here, this can be perceived as a company sellout, i.e., going for box office over art.

“We’re probably not going to be doing ‘Hair,’ ” responded Mason at one point to a press question about this shift which will occur after he has already retired, “but there is a large body of work that can benefit from a cast of singers who can really sing it: Rodgers and Hammerstein, Cole Porter, Lerner and Loewe.” “With classic musicals, the singing is more closely linked with the type of singing that we do here, and Lyric is poised with such resources to do spectacular productions,” assessed Fleming, who also admitted that because of her 15-year-old daughter, “I am a Gleek, yes, I watch the show. I am excited by the interest in singing in this country: ‘America’s Got Talent,’ ‘American Idol,’ there are huge crossover opportunities, although that style of singing is amplified, and we’re not.”

Curiously, Fleming was amplified during her second encore at Sunday’s “Subscriber Appreciation Concert,” a schmaltzy, orchestral arrangement—complete with back-beat—of Leonard Cohen’s “Hallelujah” where Fleming took a microphone and used a chesty, non-operatic low voice as if she were a singer in a club.

A handful of orchestra members and audience members alike were having a hard time knowing exactly what to make of this phenomenon or even keeping a straight face during this truly bizarre aberration, i.e. rock muzak presented within an elegant recital of opera arias, and there was a rush to get out after the number that actually cut short what were to be four planned encores: the following piece would have been Death Cab for Cutie’s “Soul Meets Body,” believe it or not, but Fleming wisely skipped ahead to finish with what she does best: un-amplified opera that showcases her full vocal range.

Fleming is also advocating having “non-operatic” performances at the Civic Opera House during the off season, not only because of the profitability of doing so that helps sustain opera the rest of the year, but also “to bring people into the opera house that have never been there before. Who knows?” said Fleming: “Maybe they will pick up a season brochure and give opera a try.”

The real deal-breaker with Fleming now on board and at least articulating more artistic influence and change in a single afternoon than three general directors have across six decades, is what kind of general manager will be hired in the wake of such a crossover coup when Bill Mason actually steps down at the end of the 2011-12 season? Although any potential general director would welcome the opportunity to have guarantees of Fleming performing, does a visionary general manager whose emphasis is opera want to have a diva, however popular, with a crossover sensibility calling artistic shots? Is Lyric Opera to become an indoor, year-round Ravinia?

Mason himself had the quote of the day when he offered in a candid moment with a sigh, “Challenging times call for challenging solutions.”