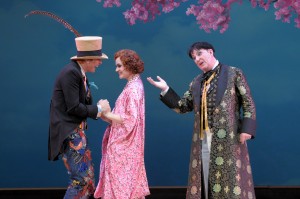 Whenever an opera director makes the decision to “update” the specific time and place of a work—a common occurrence in the opera house—the key question aside from whether or not the libretto or music will support such a shift is: why? How does the work benefit from switching the original and intended time and place to another? Is an allegory being made that can be justified by the transposition?

In the case of Lyric Opera’s new production of Gilbert & Sullivan’s “The Mikado,” the imaginary, fairy-tale Japan has been cast aside by director Gary Griffin in favor of the Japan of the 1920s. In other words, a “once upon a time” scenario of a Japan that never really existed has been replaced with a very specific Japan where something quite real and not very funny was going on that would ultimately have grave consequences for the world.

The only “Mikado” of the 1920s would be none other than Emperor Hirohito himself, and when the Mikado—played by James Morris—makes his entrance by 1930s motor car in Act II, he is wearing the same military uniform that Hirohito made so infamous during the Second World War. Not since Mel Brooks’ “The Producers” have we had a singing World War II-era dictator on stage, but the distracting problem in the case of “The Mikado” again is: why?

Leaving that immense reservation aside, this is a “Mikado” that in virtually every other respect is a “dream” production that combines the very best singing with the best possible acting. Despite being a guilty pleasure of most opera lovers, on the rare occasion when the operetta is performed by a “serious” opera company—this is only Lyric’s second production in its fifty-five year history—“The Mikado” is often not taken seriously. Of course, it is a comedy, but more often than not the shtick can become so much the center of attention that characters become caricatures. 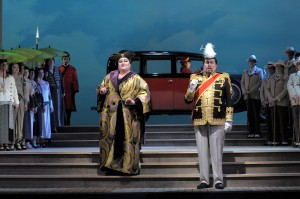 What theater veteran Griffin reminds us is that Gilbert & Sullivan not only gave us witty lyrics and memorable tunes galore but that there are deep characters behind the silly names and situations. Like any burlesque, the more three-dimensional the characters are, the more effective the satire. Thus, we actually find ourselves rooting for Nanki-Poo (British tenor Toby Spence) to get together with Yum-Yum (Canadian soprano Andriana Chuchman). Yes, the haggard dragon-lady Katisha is the protagonist of the proceedings by wanting to steal Nanki-Poo away, but mezzo-soprano Stephanie Blythe, in a show-stealing performance, is not only hilarious, but actually has a heart here, which makes her tender “Alone, and yet alive” a gorgeously sung moment, while also revealing what motivates her meanness. Ko-Ko, too—played by Welsh bass-baritone Neal Davies—is not merely a buffoon out to save his own skin but actually feels sorry enough for Katisha to woo her for real through “On a tree by a river.” Even Morris’ Mikado, a real departure for the veteran bass-baritone, has a delightfully, unemotional casual brutality to him that goes beyond the usual satirically sadistic portrayal.

Sir Andrew Davis conducting his first-ever “Mikado” (as he put it when I probed that improbable fact, “Where would I have done it? Glyndebourne? I don’t think so!”) is not only having the time of his life, but always manages to find the perfect balances and tempos to bring out transparency to the words and rhythms, no small task in Gilbert & Sullivan. (Dennis Polkow)