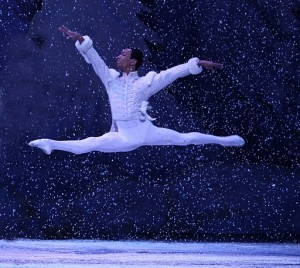 The Tchaikovsky holiday confection is so gooey sweet that many dance cognoscente view it much the way theater aficionados view productions of “A Christmas Carol.” Thankfully, the late Robert Joffrey did not share that view. As a choreographer, Joffrey came to “The Nutcracker” rather late, offering the premiere of his “American” slant on the ballet for what turned out to be the last Christmas of his life, in 1987.

Once the ballet company that bears Joffrey’s name made Chicago its home in 1995, it was inevitable that Joffrey’s particular conception of the work would make its way into the already crowded local “Nutcracker” marketplace. At that point in time, the Ruth Page “Nutcracker” had held sway here since 1965, but ceased in 1997, six years after Page’s death.

In the decade and a half that Joffrey’s “Nutcracker” has been presented in Chicago, however, it has emerged as the definitive version. For most of those years, Joffrey’s partner and company co-founder Gerald Arpino lovingly looked after Joffrey’s vision until his death in 2008, and the details and choreography of both Joffrey and Arpino are carefully preserved in the current production.

Joffrey’s conception of “The Nutcracker” is a fairy-tale ballet in Victorian America, say Boston, circa 1850. The look, at least as he described it, is Currier & Ives, with muted purples, pinks and aquas. What has always most stood out in the Joffrey version is the transformation to the world of Clara’s imagination as a land of sugarplum fairies and waltzing snowflakes that is as beautiful as it is magical. 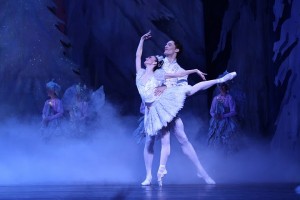 The snowy winter wonderland remains a magical, silver snowscape where we are treated to the “Waltz of the Snowflakes,” complete with a live children’s chorus, courtesy of the Oak Park and River Forest Children’s Chorus. The dance revue that makes up Act II is gracefully performed, yet isn’t afraid to display a sense of humor when appropriate, including a giant gingerbread puppet.

The most distracting element of this production has always been the return of Drosselmeyer, the Act I magician who gives Clara her magical nutcracker. In this version, he is little more than a silent-movie-villain caricature complete with black cape and moustache, and he inexplicitly reappears in Act II to needlessly “guide” Clara’s dream and her dancers. (At least the company no longer reprises music from Act I in between virtually all of the famous ethnic dances, a jarring effect which showed a total disregard for Tchaikovsky’s carefully constructed and colorful score.)

It also remains disappointing that the beginning of Act I is little more than a crowd of people—mostly children—haphazardly moving around on stage, but the “March of the Wooden Soldiers,” which used to be just children skipping around, now appears to have some actual dancing to it.

When Joffrey first came to Chicago, the music was canned, but over the years, a terrific partnership has developed with the Chicago Sinfonietta, which this year is being conducted with considerable flourish and nuance by Tito Munoz. (Dennis Polkow)