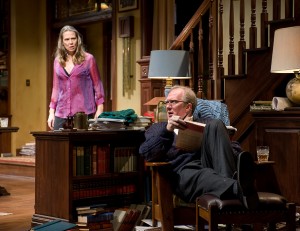 Edward Albee’s iconic play from 1962, which won the Tony Award for Best Play and soon after became an acclaimed movie starring Elizabeth Taylor and her frequent husband Richard Burton, is a boxing match for acting heavyweights, where the fighters spar with words.

George and Martha, just home from a faculty party, are engaged in playful but barbed repartee that at first recalls the likes of Tracy and Hepburn and other savage wits of Hollywood lore. A new young professor Nick and his wife Honey have been invited over for cocktails after the party, though they are really just prey for George and Martha. The entire play unfolds, as the war between George and Martha escalates into something far too ugly for the silver screen, in the increasingly claustrophobic confines of their home—designed with appropriate New England academic shagginess by Todd Rosenthal—in the wee wee hours of morning.

After two decades of marriage, Martha and George are despicable creatures, or as George tells Nick, who is alarmed by the unfettered hostility, “we’re merely walking what’s left of our wits.”

Tracy Letts’ George is a worn-out shell of a man, beaten down by the one-two punch of professional disappointments suffered in the face of a father-in-law who rules the kingdom as president of the university where George toils in the history department, and a wife who seems to define her existence by letting George know what a failure he is compared to her father. “A simp,” she calls him. George half-heartedly amuses himself with social swordplay,  slicing up anyone in his range with an effortless nonchalance. Letts skillfully gives his George an air of perpetual disengagement that suggests that even this verbal gamesmanship bores him, that he’s using a mere fraction of his wit.

Though she’s George’s intellectual equal, Amy Morton’s Martha is a feral man-killer, the type that devours what she wants then moves on to the next prey, leaving half-eaten carcasses in her wake. Since she’s defined her life in terms of her husband’s success in her father’s eyes and come up wanting, she lives for the moment, without regard for the consequences, fueling herself on a steady course of alcohol, flirtation and undisguised philandering. 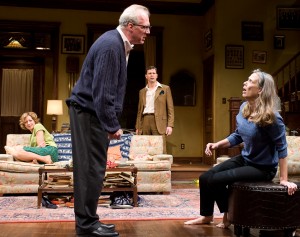 The young couple is no match for these two, even though Nick and Honey share most of the stage time in this three-act, three-hour cage match—helmed for maximum comic effect amidst the carnage by the playwright’s frequent collaborator, Pam MacKinnon. Albee’s written their characters as shallow foils. Nick, played with suitable earnestness by Madison Dirks, is a reasonably affable, cocksure young biology professor with ambition who, though described as an academic boy wonder, is entirely out of his league with George and Martha who play with him like a toy. He is burdened by his comparatively dim bulb of a wife, Honey, who not only cannot keep up with the banter, she cannot even keep up with the boozing. She is a cruel creation of Albee’s, and Carrie Coon is masterful in evoking her unrecognized charm and warmth; she is the only likable person on stage.

Nearly fifty years after its debut, “Who’s Afraid of Virginia Woolf?” plays as the ultimate dissection of marriage in its mentally cruelest state and is a showcase of the highest order for actors at the peak of their craft, like Letts and Morton. But when Edward Albee wrote it, he was a young man, and America was in a very different place; the scars of World War II still fresh, the scars of McCarthyism and the emerging Cold War even fresher. That “Woolf” is meant to be a metaphor for America could not be telegraphed more clearly: George and Martha. But, perhaps like the nation then and now, the message is muddled: Do George and Martha stand for the perpetually bickering political parties, destroying each other one day at a time while the real problems of the world go unsolved?  Is the old order they represent, ugly as it is, giving way to a new order,  represented by Nick and Honey, of even lesser worth,  one enraptured, menacingly, by a new genetic science that portends a master race that the freshly vanquished Hitler could only dream about? Though Albee’s age at the time would seemingly align him with the new generation, there’s certainly no hippiefied path to utopia in his sights.

Viewing this canonical masterpiece—one tightly controlled in its presentation by its still-active author—through contemporary eyes, “Woolf” is somewhat undermined by its prejudices. East Coast snobbery abounds in its characterizations of Nick and Honey as relative rubes, like Huns from the Midwest ready to crush the high civilization of George and Martha, whose display of intellect signifies a higher order even as their behavior signifies the lowest. Even more nefarious, though, is the misogyny afoot. Though the women are magnitudes apart in intellectual caliber, both willfully succumb to roles defined entirely by marriage. Neither has an apparent vocation or even avocation other than in support of hubby’s career pursuit. And where the men define success on the battlefield of academia, the women, pathetically in this case, seek it in their reproductive organs. George, ultimately, plays Martha like a puppet. It’s not a fair fight. (Brian Hieggelke)