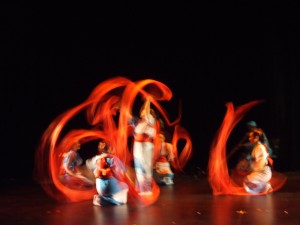 Watching a thunderous, highly choreographed taiko performance, you might be inclined to think you are witnessing an ancient Japanese rite, an homage to emperors and Shinto goddesses passed down from masters through wide-eyed generations, like karate or sushi making. In truth, taiko performance—at least the way Americans most often see it played, as an ensemble—is a post-World War II art form, developed by a jazz musician who helped disseminate it around the globe during his lifetime. Ensemble taiko is less an expression of ancient ritual than a thriving, evolving percussive art birthed at the outset of the Japanese diaspora.

The MCA Stage is an appropriate home then for a taiko spectacular smattered with improvisatory jazz, Japanese lute, Korean vocal performance and traditional kimono dance. Chicago-based JASC Tsukasa Taiko (funded by the Japanese American Service Committee of Chicago) gathers artists, including youth ensembles, from San Francisco, New York and Tokyo to put on the largest show of this kind each year at the MCA—an adrenaline-charged departure from the customary sugar-laced holiday fare. It’s refreshing to see kids in kimonos hammering tribal rhythms from massive drums with the grace of martial artists; you’re more inclined to respectfully bow to them after the show than coo at their adorableness.

Taiko is equal parts auditory and visual performance; most drummers don’t show you the beauty of the space between beats (though any respectable drummer will tell you what is not played is more important than what is); in taiko, the energy directed toward and reflected off the drumhead moves through the performer in fluid waves, arms rebounding from each strike as though pulling the sound from the taiko and redirecting it to create the next beat. Amy Homma, leader of JASC Tsukasa Taiko, talked about the rigors of taiko in a video interview created by the MCA. “It’s tiring,” she said with a laugh. “People think that you’re just hitting the drum, but when we’re playing taiko it’s not about how much we hit the drum, it’s about how we hit the drum. It’s all about choreography.

“Ha!” Homma exclaimed, playfully extending her fist. “We do a lot of movements from martial arts to keep the energy going even when we’re tired.” (Sharon Hoyer)