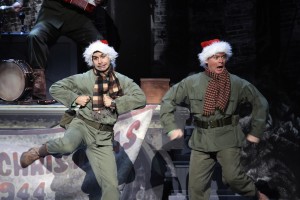 When Irving Berlin wrote the song “White Christmas” for his 1942 film “Holiday Inn, ” the story goes that he was expecting “Be Careful, It’s My Heart, ” the Valentine’s Day number, to be the big hit. Bing Crosby never saw the popularity of “White Christmas” coming either—he reportedly laid down the track that remains the best-selling single of all time in eighteen minutes—but it was Crosby’s gently crooning it to a country newly navigating its way through the horrors and sacrifices of World War II that ended up nostalgically reminding everybody of exactly what we were fighting for in the first place.

Ironically, though “Holiday Inn” was made during the war, the film itself exists in a warless vacuum aside from a patriotic montage of troops, weaponry and FDR shown during the Fourth of July sequence. Thus, its lavish, widescreen and Technicolor remake twelve years later made sure to refocus the attention and title on its breakout song, “White Christmas,” and that song’s own nostalgic relation to the war itself now that the country had successfully achieved victory, peace, stability and prosperity with weapons that had included songs to inspire both the front lines and the home front.

The musical “White Christmas” attempts to offer a stage version of the 1954 film, deleting some numbers and adding other better-known Irving Berlin songs but basically relating the same story of a postwar general who is running a Vermont inn that is in trouble because a December heat wave is keeping the snow and the skiers away. The general gets help from a couple of his former men who are seen entertaining the troops during the war at the show’s beginning (with “White Christmas,” of course, but also with “Happy Holiday” from “Holiday Inn”) and who just happen to be huge stars now chasing down a duo of sisters who also have an act. The general’s granddaughter is no longer a minor teen character but a Broadway-belting little girl who makes Annie sound subtle. The housekeeper is an Ethel Merman wannabe who also gets in her share of songs. 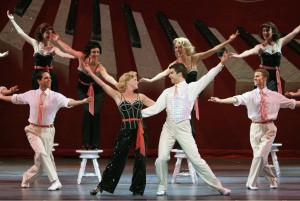 It might work except that in this production at least, the acting is done in a faux fifties manner almost as if the cast of “The Brady Bunch Movie” were doing the show with a wink and a nod at every turn. The other problem—and this is the deal-breaker—is that most of the leads are dancers, not singers. We are talking community-theater-level singing here where song climaxes are marred by performers unable to sustain pitch and keep a vibrato from spilling over into chaos. The iconic songs of Irving Berlin, to say nothing of Chicago holiday audiences, deserve better.

The one saving grace is that most of the cast are strong dancers and the choreography is of a significantly higher level than the other elements of the show, most memorably displayed in the extended and clever “I Love a Piano” sequence. It is unfortunately not enough to justify nor save the entire evening. (Dennis Polkow)