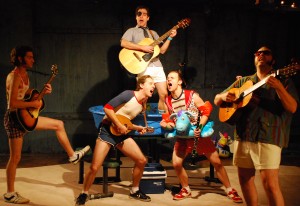 Those who only like their Gilbert & Sullivan served up with all of the trimmings—trained voices, full orchestrations, full chorus, et al—would be well-warned to stay away from Sean Graney’s musically minimalist version of “Pirates of Penzance.” Its famous melodies are merely approximated, by and large, by Graney’s small troupe of committed actors who dabble in singing, and Sullivan’s orchestrations are stripped down to the lowest-common-denominator guitar chords, largely strummed by the performers themselves hootenanny style, sometimes incorporating clarinet, banjo, mandolin, ukulele and accordion.

And yet the charm, energy, integrity and youth of the Hypocrites re-imagining of this familiar warhorse is so contagious and so dramatically convincing that their spirited irreverence suggests a contemporary approximation of how G & S might have been experienced in their own time.

From the moment you walk down into the steamy basement of the Chopin Theatre, which has been totally transformed into a bad suburban pool-patio party circa the “Laugh-In” era complete with lawn chairs, electric tiki torches and inflatable water toys, the cast is performing water-related folk songs as they welcome you. The Pirate King (Robert McLean) sports a navy private’s sailors’ hat with “King” written on it and uses his “I am a pirate king” as a rock-anthem moment in the solo spotlight. Frederic (Zeke Sulkes) has the least accessory-laden attire, but Ruth (Christine Stulik) can be picked out immediately with her curlers and frumpy attire, complete with life vests and swimming flippers. The Major General’s beautiful daughters all have tutus and flowery bathing caps but Mabel (also Stulik) is a particular show-off with her attempted coloratura embellishments and colorful horn-rimmed glasses; the Major General (Matt Kahler) himself sports a German spike helmet. Virtually every lead except for Frederic doubles on a major role to great effect and the intermissionless eighty-minute adaptation is breathlessly relentless. 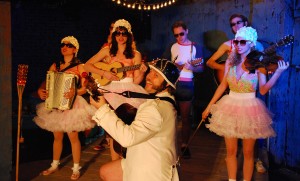 The most remarkable aspect of this “Pirates” is how accurately it reflects the G & S spirit but with a contemporary sensibility and accessibility. When the Major General is having trouble coming up with a rhyming couplet for “strategy,” his daughter, obviously perceiving anything he does or says as “old,” suggests “colonoscopy.” When the verse lampooning “Pinafore” comes up, “it’s an inside joke,” we are told, attempting bigger laughs. During the “Paradox” chorus when a line is confusing, Frederic turns and silently mouths, “What the fuck?” to an audience member. It is those little, irreverent details that really make the show. But most importantly—and here opera companies could learn a lot from the Hypocrites—no matter how outrageous either the characters or situations are, they heed the counsel to be authentic and fully inhabit outrageousness as the norm, never with a nod and a wink—the more seriously it is taken, the more effective the satire. (Dennis Polkow)