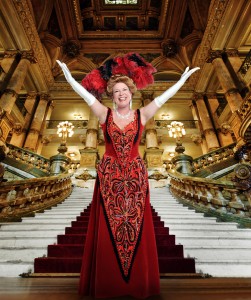 Okay, so it’s Christmas week and Newcity isn’t publishing again until January 6, so no print review of this show is able to appear before it closes on January 2. Nonetheless, there are some troubling issues raised by Light Opera Works’ production of “Hello, Dolly.”

As the world knows by now, Lyric Opera announced earlier in the month that soprano superstar Renée Fleming is becoming the company’s first-ever “creative consultant” and wants Lyric to start doing annual musicals, which will commence with “Oklahoma!” Lyric also has now performed operettas two years in a row, once a great rarity at that company which had thought for decades that operetta—let alone musical theater—was beneath the operatic mission and identity of the company.

Less known is that the Evanston-based Light Opera Works was founded thirty years ago to perform the very genre that Lyric ignored—namely, operettas—as its mainstay repertoire and core identity as the company name might suggest, and used to do exactly that, only performing musical theater pieces as a rarity. That formula has reversed itself at LOW to where operetta is now the exception—generally one out of four works per season—and musical theater the rule. The company has justified this by claiming that this is the ratio that its audiences preferred and that LOW was still contributing much to the local arts scene by showcasing musical theater works with trained singers and as they were meant to be heard with original full orchestrations and choruses, something rarely heard even on Broadway these days.

And so, curious to hear how the 1964 musical “Hello, Dolly” would fare with such an extravagant approach, and thoroughly tantalized by the remarkable “Carousel” that the company did last summer, I headed off the day after Christmas expecting to experience “Dolly” with all of the trimmings, only to discover that some important courses and side dishes had been taken off the banquet table without prior warning. 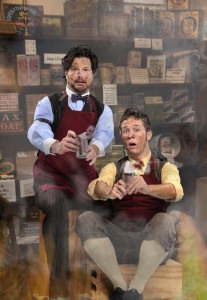 Instead of the full overture, a signature of shows of that era and one of the true showcases for bothering to hire an orchestra in the first place, the curtain rose to the first musical number with no overture whatsoever. As the show progressed, it was clear why: the banjo that is such a fixture of the overture and indeed, of the show itself was nowhere to be found, and the growling saxophone section that is heard alongside of woodwinds could not be heard since woodwind players were doubling on saxes.

When Dolly came onstage mid-number, she was heavily amplified and not an opera singer nor even a trained singer, but an actress with a shopworn show voice that was often barely capable of melodic cackle. True, Carol Channing was reprising this role well into an advanced age, but she was the original Dolly, and despite the voice at its best being less than desirable, she had charisma and acting ability in spades to make up for that. The male lead at Light Opera Works which, granted, is meant to be bland to stand in contrast to the flamboyant Dolly, also was an actor with a barely passable show voice, not an opera singer.

“Dolly won’t never go away,” for sure, but if she’s hanging around the opera house, she ought to at least be sung and with the best voices possible. Even on Broadway, we eventually got Pearl Bailey in the lead. If you are not going to play all of the work as written with the instruments scored for and with singers who can really sing this stuff, what business does an opera company—light, heavy or otherwise—have in doing these works?