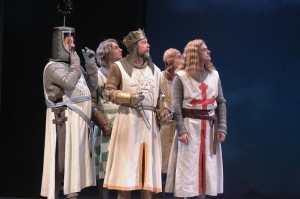 The ongoing love affair between “Monty Python’s Spamalot” and Chicago, where the show had its pre-Broadway tryout five years ago, continues. Eric Idle’s wife of thirty years is a Chicagoan and Idle is frequently back in the area as he was over the holidays, even checking out the rehearsals at Drury Lane. Judging from the end product, it would be hard to imagine that Idle wasn’t extremely pleased at his sound judgment in giving Drury Lane permission to give the show’s regional theater premiere.

Making use of the costumes from the London West End production, which recently closed, means that the Drury Lane production looks as good as “Spamalot” ever did, even if the sets are less elaborate. Terry Gilliam’s animations and John Cleese’s voice as God are notable no-shows but the gags and comic timing are far more effective in an intimate environment. When the audience member was chosen to come onstage to celebrate the finding of the Holy Grail, the audience went nuts and the guy was so excited that he dropped his inhaler along the way, all effective fodder for the onstage humor.

This is not an easy show to do: comedy is serious business. But thankfully, director William Osetek has immense understanding of and obvious affection for Pythonesque humor in addition to his considerable musical theater chops, a killer combination. Osetek has transplanted the show’s sight gags intact, but effectively scaled them back with subtle silliness. And he is not afraid to throw his own ideas and gags into the mix with even a dash of Chicago humor, nicely updating the show. 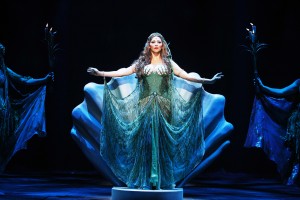 Of course, it stands to reason that the more affection that you have for anything Monty Python, the more you will enjoy the transport of the vintage British comedic franchise to stage. Entire routines are lifted word for word from the haphazardly put together 1975 “Monty Python and the Holy Grail” film. And the show’s Anglophile satirizing of musical theater is limited to a certain British brand of musical popular in the late 1980s and early 1990s that was big on melodrama and scenery—namely, Andrew Lloyd Webber—already out of fashion even when “Spamalot” made its initial bow. And the comedy related to gays and Jews can come across as more mean than funny.

When all is said and done, though, this superb Drury Lane production brings to the proceedings a reminder that the best “Python” routines never came across as routines at all, but as silly people who haven’t the slightest clue that they are being funny. (Dennis Polkow)