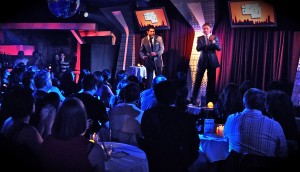 Once upon a podcast, comedians Mike David and Kyle Lane morphed from DIY radio hosts to successful comedy club owners in one quick year. On Friday, the pair toasts the first anniversary of their Red Bar Comedy Club with a nice ol’ roast. Local comics and friends will unleash the rollicking truth (and perhaps some falsehood) of David and Lane in a free show at the club’s Ontourage home. “Hand-picked by us,” says David, “these are the best comics of the year.”

As host of Red Bar Radio, David has been broadcasting comedy over Chicago’s airwaves for nine years. Lane joined him in 2007, when the duo noticed a gaping hole in the city’s comedy outlets.

“For a city this big, there is no reason there should only be one club,” David says, naming Zanies as the only unequivocal standup venue. Underground comedy abounds, but many of those shows are organized by comics who have little resources for polished presentations, explains David. “We found a different way to do it: we share space with a nightclub that’s been around for years. We can charge a little without worrying about spending.” (Friday night’s show is free, but Red Bar charges a $10 cover with no drink minimum for regularly scheduled shows.)

David describes their first year of patrons as a medley of tourists, suburbanites and comedy lovers of all ages. A loyal following, he says, is a work-in-progress as Red Bar attempts to wrangle Chicago’s acclaimed comedy onto a professional, Vegas-style stage.

“People who have never been to a comedy show, those typically aren’t as good of laughers as people who are into it. We want people who will laugh the loudest.”

Most of Friday’s performers (including James Fritz, Marty DeRosa, Drew Michael, Brian Babylon and Joe Kilgallon) have frequented Red Bar within the past year, but the owners expect a diverse audience of old fans and new faces. “It’s a lot of fun for all the fans who have come to the club over the year… and for people off the street.” (Kristine Sherred)