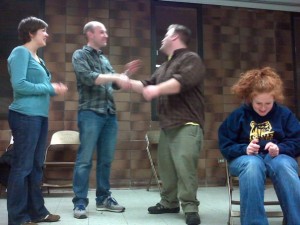 With literally hundreds of theaters, from Steppenwolf to the storefronts, Chicago is a mecca for would-be actors and comedians. Every year thousands of kids fresh out of college sign up for classes at iO or Second City with dreams of becoming the next Bill Murray/Chris Farley/Tina Fey/insert famous funny person’s name here. Growing up in Chicago in the nineties felt like having a backstage pass at the epicenter of the comedy world—my friends and I to this day talk about seeing Tim Meadows and Chris Farley at iO do a bit about interracial dating, or seeing Adam McKay (director of “Anchorman,” “Talladega Nights,” etc), Rachel Dratch (SNL) and Scott Adsit (“30 Rock”) in “Pinata Full of Bees.” Hell, I even went to high school with a guy who was on MADtv (Ike Barinholtz, if you want to look him up).

But that’s the thing, you don’t get famous staying in Chicago. Yes, TJ Jagodowski and Dave Pasquesi are local heroes, adored for their craft. But if you live outside of the cloistered Chicago comedy community you’d have no idea who they were. My friend Michael McCarthy (creator of “Big News!” who now, incidentally, lives in LA writing for “Mike & Molly”) would often refer to Chicago as “The graduate school of the comedy world.”

So when I went to see my good friends The Backrow perform at Sketchfest’s tenth-anniversary show on Saturday, it was with slightly mixed emotions. The Backrow is one of only four sketch groups to have performed at Sketchfest all ten years (the other three being iO standouts The Cupid Players, Asian-American troupe Stir Friday Night (which includes cast members of “Community” and “The Walking Dead”), and Monsters from the Id). They’re absolutely hilarious, with smart writing and a real knack for wedding the surreal and the mundane—their closing sketch was a life raft comprised of the “unwanted” table from a sunken wedding cruise (“I designed the wedding invitations,” says one castaway; “I dated the groom back in college and he felt obligated to invite me,” says another). A few of them still perform (Arnie Niekamp can be found weekly as a central cast member at iO’s “Whirled News Tonight”), but for most of the nine-team group comedy has taken a back seat to PTA meetings and nine-to-fives.

“It’s much more difficult to find time to work on the show,” says Nick Baer, one of the founding members of the group. “Since nearly everyone in the group is now married, many of us with children, it gets a little harder to squeeze in a three-hour Sheil Park rehearsal on a Tuesday night.”

His wife Katie, who’s also in the group, adds, “When you’ve got a bunch of little kids running around while you’re trying to do a scene, not much really gets done.”

As far as trying to make a career in comedy, Nick notes that “it’s definitely different for each person in the group. Some have never considered it more than an exciting hobby, and some of us still seriously pursue it. For me personally, as I started to have a family and career, it became clear that I wasn’t willing to devote three-to-four nights a week to performing, particularly in groups and projects that were more stressful than fun. For the last few years I’ve performed exclusively with friends, and in projects that I actively enjoy, and it’s amazing how much more awesome that can be.” (Jonas Simon)