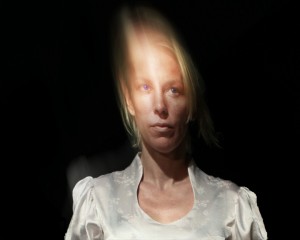 More than thirty performances are programmed as part of this year’s Rhinofest. Here are our top twelve picks. All performances take place at Prop Thtr, 3502 North Elston Avenue.

4:48 Psychosis
Curious Theatre Branch remounts their production of Sarah Kane’s highly autobiographical swan song to clinical depression, directed by Beau O’Reilly. The show only ran for two weekends last July, so those who didn’t get to last time now have a second chance to see it.
Fridays, January 14-February 11 and Saturday, February 12, 7pm.

The Aquatic Chronicles
Performance artist Julie Laffin’s career underwent a fundamental transformation a few years ago when she developed multiple chemical sensitivity, a condition that forced her into extreme isolation as well as ironically making much of her later work all the more collaborative. Here a video by Laffin pairs with a performance piece by Judith Harding, each of which echoes the other thematically, if not narratively, around depths explored and ignored.
February 11-February 13, 7pm.


Currency
Based in Champaign-Urbana, Lisa Fay and Jeff Glassman have been creating movement theater pieces together for nearly twenty years. “Currency” is an evening of their short, typically wordless pieces that purport to deconstruct the notion of “naturalistic” movement and physical behavior.
January 21-January 23, 7pm. Also, “Scoring the Dynamics of Three-Dimensional Time and One-Dimensional Space”: A Workshop by Lisa Fay & Jeff Glassman, January 30, 2pm.


Deja Links
In a previous life the basement of Links Hall was called Club Lower Links, and in its heyday of the late eighties and early nineties it was a hotbed of performative and artistic activity of all sorts. “Deja Links” pays tribute to that artistic gumbo with performances by many of the artists who originally performed there.
Fridays, January 21-February 11, 9pm.

Fruit Tree Backpack
Last summer a production of Barrie Cole’s play was lauded for its smart writing, Eric Ziegenhagen’s minimalist direction and a surprisingly deft performance by Marisa Wegrzyn, known more as a writer than as an actor. The latter two elements appear to be returning intact for a new production at Rhinofest, though Cole’s script, a trio of scenes from a relationship, gets an upgrade. We’ll see if the changes are for the better.
January 15, 7pm; Mondays, January 17-February 7, 9pm. 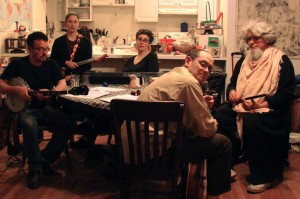 Full Moon Vaudeville
This one-night-only kickoff/benefit/fundraiser/show will set the entire Rhinoceros Festival in motion and features live music by the Crooked Mouth String Band, a sort of Brechtian, honky-tonky outfit that is at least partly composed of members of festival curators Curious Theatre Branch. Expect an excess of food, drink and merriment in exchange for your suggested $15 donation.
January 14, 9pm.

Mascot
Found Objects Theatre Group contributes a double bill to this year’s Rhinofest; we’re especially intrigued by “Mascot” by Chris Bower, a Chicago theater stalwart and host of the weekly Ray’s Tap Reading Series. His is a “tragic sitcom” about a husband and father who worries most about being barred from his son’s football games when his family gives him a restraining order. It plays with Mark Chrisler’s “Dr. Huckleberry Persimmon Explains Very Little for You!”
Saturdays, January 15-February 12, 9pm. 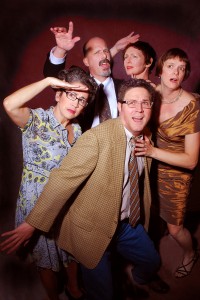 Massive Fireball Reported Across Midwestern Sky
Performance group BoyGirlBoyGirl’s M.O. is to take a single text to inspire each member to write and perform a monologue. Their latest comes from a CNN.com article of the same name, although with this troupe’s monologue performance pedigree, the show is likely to be much more than literal.
Saturdays, January 15-January 29, 9pm.

Mexico
Terry Gilliam’s classic film “Brazil” has precious little to do with the Latin American country, and likewise modernist writer Gertrude Stein’s 1916 play contains only a few passing references to Mexico. While Jennifer Moniz’s liberal adaptation of the work might not make any more sense of the title, its explications of the themes of place, community and language sound promising.
Sundays, January 16-February 13, 7pm

Scenes from New Voices
Showcasing new works by students at the School of the Art Institute of Chicago, this is probably the most obvious example of the festival’s tradition of programming work by young up-and-comers alongside work by seasoned vets.
February 6, 3pm. 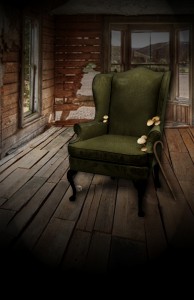 The Spores of Eden

The Spores of Eden
Sounding like a female version of “Endgame” or “Godot” (or any Beckett, for that matter), it’s one of the few offerings this year that closely evokes the Absurdist bent suggested by the festival’s name. A mother and daughter play a demented Easter egg hunt in a play by Peter Axel Komistra that ultimately reflects on death, decay and suffering. With a hidden rotting egg as the play’s central MacGuffin, I just hope it’s not presented in Smell-O-Vision.
Saturdays, January 22-February 12, 3pm.

See The Rhinoceros in the Room: Chicago’s festival of fringe embraces its past and future at 22