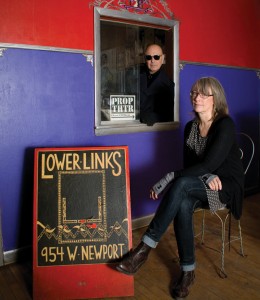 Chicago’s longest-running theater and multidisciplinary-arts fringe festival is known both for the compelling risk-taking of its participating artists as well as the age span of its participants. And while it’s been the best place to take in work by artists who have been making innovative work in Chicago for decades, this year’s festival has a particularly strong historical depth as well as serving as a forum for the most nascent of emerging artists.

Beau O’Reilly, who with Curious Theatre Branch has been curating the show for more than twenty years, is teaming up with Prop Thtr to bring back performances to this year’s festival that were seminal in Chicago experimental art, including “Deja Links,” a reunion cabaret show from legendary performance art/music venue Lower Links, which in the eighties and early nineties brought a sense of experimental optimism to the arts scene.

“A lot of the people who have been with the festival for a long time,” O’Reilly says, “played at Links all the time, so Lower Links was a very central place for us pre-Rhino. The list of names at Deja Links is an all-star list from that period.” O’Reilly sees this year’s Rhino Fest as coming full-circle, “a return to the beginning places for us—and also just the whole scene that’s been going on over the past twenty years now.”

It’s a prescient year for the return of Lower Links, as the culture wars seem to have re-emerged—the Smithsonian’s censorship of David Wojnarowicz’s “A Fire in My Belly” has created a nationwide protest that is all too reminiscent of the culture wars fought across the country a couple decades back, one where Lower Links provided both war room and refuge for many performers. Leigh Jones, the owner of Club Lower Links at the time, explains that “writing our description for the Deja Links show, all the problems we were up on our soapboxes about those years ago are here again. At the time we were worried about the NEA and censorship and people trying to get rid of NPR funding. It’s come back to such similar problems.” 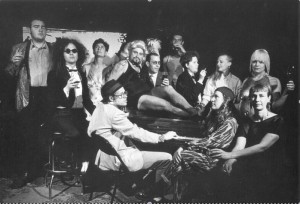 What can audiences expect of Deja Links? Jones says it will be very reminiscent of Lower Links shows from decades ago: an evening of multiple performances, mostly performance art but with some music as well. There’s no overt theme to the show—“It has always been and will be this time very loose,” Jones says, “People are just doing what they want to do, with performances from five to fifteen minutes. Usually the stuff is pretty avant-garde and a little twisted, which we like.”

In addition to Links, Rhino’s formidable performance artists include the Aquatic Chronicles show, featuring artists Judith Harding and Julie Laffin performing relational pieces. For O’Reilly, the excitement comes from “very different artists in their fifties who have been making work for a long time” playing against each other’s strengths: “Judith generally does funny, story-driven solo work, while Julie works in terms of art history from an intuitive performance background.” The two are friends but have never before performed together—this sort of collaboration is what makes Rhino so strong. In another exciting dual performance, Lisa Fay and Jeff Glassman were discovered last year by O’Reilly as unlike anything he’d ever seen: “Very physical comedy, very clown show, silent-movie driven, but with a political point and that’s pretty exciting work.”

Of course, this year’s Rhino has a lot of the “brand-new work by brand-new playwrights” that also drives the festival, with O’Reilly including more student showcases than they have had historically, saying “it’s an important part of the mission.” 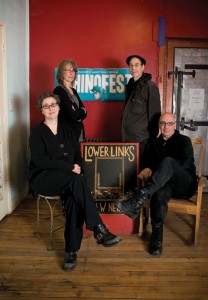 Theater highlights include Chris Bower, whose imaginative work has long been a mainstay of the festival, who this year is working with Found Objects Theatre Group on “Mascot,” his “tragic sitcom of rage, disguises, wet grass and whispers.” O’Reilly’s own Curious Theatre Branch has two shows written by illustrious women, Sarah Kane and Gertrude Stein. Doing both plays, according to O’Reilly, was a “very unusual thing for us… but we did the Kane play (‘4:48 Psychosis’) this summer and really liked the result of this very powerful piece of work about the end of a person’s life.” Kane’s work in nineties Britain was controversial and echoes the serendipitous “culture wars” theme of this year’s festival. Even edgier is Stein’s theater piece “Mexico,” which is “very experimental in shape,” O’Reilly says. “Stein calls it a play, but it’s hard to tell.”

What does O’Reilly make of the historical depth this year? “Our collective brain is working in that direction,” he says, and with performances that include Chris Sullivan’s “The Outer Giants and Their Moon,” which includes writing love letters to the dead, and Jessica Hannah’s study of memory in “Recall,” Rhino has reached a moment when its past helps imagine its future.