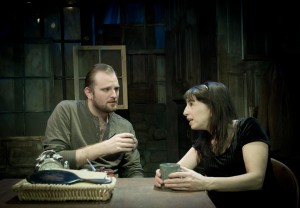 The hyperbolically dark humor and gut-wrenching, even tortuous melodrama in Martin McDonagh’s play is easily matched, if not almost outdone, by the fierce, intelligent energy of Steve Scott’s cast in Shattered Globe 2.0’s production. “The Beauty Queen of Leenane” follows the beyond-dysfunctional relationship between Maureen, a 40-year-old caustic spinster who takes care of her importunate aging mother in the Irish village of Leenane, and Maureen’s unexpected chance at romance. The play is by turns black comedy, moving family drama and theater-of-cruelty-level horror—but what’s most remarkable is the way that McDonagh, with beyond-sharp, mercurial dialogue constantly flowing between banter and revelation, carefully balances and then unhinges our feelings for and understanding of each character. Scott gets performances out of all four actors that are somehow both subtle and balls-out forceful, not a single moment of comedy or pathos ever lost or misused. The technical theater keeps up, with a domestic set that’s equal parts claustrophobic cottage and chapel, and Irish vocal music that’s so well-used it almost becomes another character. (Monica Westin)