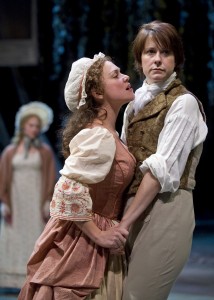 For his debut Shakespeare production, the gender-bender comedy of love-at-first-sight “As You Like It,” accomplished director Gary Griffin chose a straightforward interpretation, free of subtext or modernization. The result is a perfectly fine show, delivered at the highest level of professionalism throughout, that leaves those of us looking for revelation every time we enter the theater still looking. Kate Fry delivers a stalwart performance in the central role of Rosalind, her talents in fullest flourish in the climax, where she plots to wrap up all the unfinished love stories in one broad stroke. It’s a fast-paced scene that underscores the core problem with this production: pacing. Arguably not the Bard at the top of his game—”all the world’s a stage” notwithstanding—this comedy needs a briskness to soar through its increasingly preposterous plot, and brisk this one is not. That being said, Elizabeth Ledo’s Phoebe, a minor role, virtually steals the show with her kinetic performance and Ross Lehman’s Jaques is memorable, but he does get the best lines, after all. Kevin Depinet’s set is, like everything else, satisfactory. Critics often howl in complaint at stylized or revised takes on Shakespeare but there’s something to be said for risk-taking. In that regard, the setting of Shakespeare’s songs within the play to music is a pleasant touch. (Brian Hieggelke)