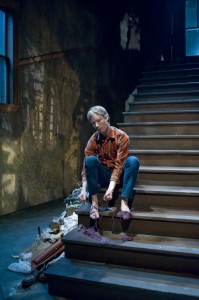 There’s something both captivating and yet oddly irksome about The House Theatre’s style. In “Odradek, ” the set, lights, puppetry and sound all contribute to a decidedly macabre, expressionistic horror fantasy. The central set piece, a giant staircase, looks like it came straight out of a haunted-house film.

What’s troubling is whether or not this new play by Brett Neveu, the well-produced Chicago playwright, is really worth all the ingenious stagecraft. Adapted from a Kafka short story, the play finds Kyle struggling to come to terms with the divorce of his estranged father and absent mother, and with his father’s new romance with the doctor treating Kyle for self abuse. His only comfort comes in a pile of junk under the stairs, which Kyle brings to life as the monster Odradek.

It’s all rather heavy stuff, and the play plods forward like a leadfooted monster. The persistent disquiet of the play might actually be a lack of nuance. Ultimately the details of the domestic drama hardly rise above cliché and never truly reconcile with the play’s more shocking elements (and they are lovingly rendered). Like the boy protagonist, the production avoids the harsh difficulties of reality, instead escaping into a darkly, sumptuous fantasy. Kyle might have realized his error in the end; I’m not sure about the House. (Neal Ryan Shaw)