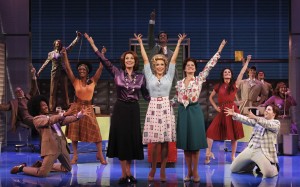 As if the Dolly doppelganger in the form of American Idol runnerup Diana DeGarmo and the digitized projection of Dolly narrating the show within the face of a huge center stage clock weren’t enough, there was a third Dolly on hand at last Wednesday’s opening night of the national touring production of “9 to 5”: Dolly Parton herself.

Escorted by Governor Pat Quinn, who officially proclaimed the occasion—which just happened to be Parton’s sixty-fifth birthday—as “Dolly Day” in Chicago, Parton took the stage in a magenta fringed outfit and told anecdotes to the audience about everything from filming “9 to 5,” her first movie, to getting to know and love Chicago when she filmed “Straight Talk” here. The audience interrupted at one point with a spontaneous chorus of “Happy Birthday,” and Parton seemed genuinely touched and gushed with her signature Southern charm and said, “That’s just about the sweetest thing that ever happened to me!”

If only the rest of the evening had been as entertaining.

The 1980 film “9 to 5” about three working secretaries who forge a close friendship and share fantasies about various revenge scenarios that they would like to take out on their egomaniacal, chauvinistic boss during a 1970s-style pot party was more of an overlong comedy sketch than a movie plot, but the remarkable chemistry between its stars (Jane Fonda, Lily Tomlin and Parton) and the empowerment that it gave to working women with whom the movie struck such a deep chord turned it into an iconic film. 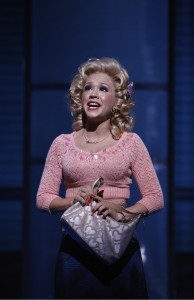 Although Parton had already been a successful singer and songwriter, the film put her into mainstream culture as an actress and larger-than-life personality as well. Parton also wrote and performed the catchy title song, “9 to 5,” which became a huge hit. On paper, the idea of Parton writing additional songs for a stage musical version of the movie seemed sound. The problem is that Parton approached writing these songs in much the same way that she would write an album, i.e., lots of melodrama and insight, profound lyrics and a country style. As a collection of songs, “9 to 5” is a remarkable achievement: every one is well-crafted and polished and is head and shoulders above the quality of much of the songwriting that is currently heard in musical theater circles.

The problem is that the songs rarely have little, if anything, to do with the plot, such as it is. Instead, with some minor exceptions, most of the songs are stand-back-and-stop-the-action arias that grind the action and, most damningly, the laughs to a halt. And so, what comedy might be had here goes on forever like a bad “Saturday Night Live” skit that may have had one funny idea but annoyingly outlives its welcome. Imagine that experience interrupted by a “serious” country music song full of pathos, by performers whose job it is to imitate familiar performances in a movie where two of the characters never sing, and one who only sings offstage during the credits.

Opening night was fun, thanks to the real life Dolly who also took a curtain call at evening’s end and told more stories before a cake was wheeled onstage, which she even wanted to share with the audience. But even while the show was going on, it was actually far more interesting to watch Parton watch and react to her faux persona onstage than to watch the show itself. Not a good sign. (Dennis Polkow)