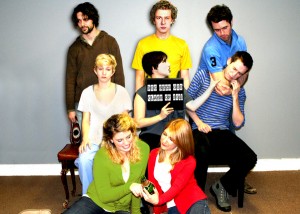 Like a foul-mouthed, drug-addled precursor (“Dog Sees God” was originally produced in 2004) to the recently launched It Gets Better Project reaching out to bullied LGBT teens, Bert V. Royal’s parodic adaptation of the Peanuts gang addresses teen bullying and suicide in a darkly comedic tale of teen angst and sexual identity that episodically paints a bleak picture of high school life. It’s a timely piece with a promising ensemble, but Epic Theatre Company has plenty of work to do before this show reaches its full potential. Early on, one character turns to another and yells “Stop being so melodramatic!” Co-directors Scott Adam Johnston and William Hasty would have done well to issue that note to their emotive cast; many of the deeper themes are lost amid alternately yelling and playing for laughs. Additionally, the sparse set and meager lighting feel more like shortcomings than design decisions and blocking often leads characters (and thus the audience) into the dark. (Zach Freeman)