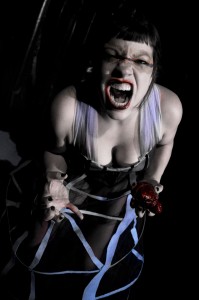 To call “Hamletmachine” difficult to stage is an understatement. The six-page non-narrative avant-garde adaptation of “Hamlet” by Heiner Müller takes detournement to new heights, turning Shakespeare’s play into an expressionist nightmare version of modern German history. Müller’s own self-admittedly unsuccessful production ran seven hours, and Robert Wilson’s production garnered critical acclaim but ignored almost all of the text and stage directions. Trap Door’s production succeeds paradoxically by adding even more layers of complexity to the text: turning it into a concert opera with a haunting score/libretto by Jonathan Guillen that, with the show’s eerie but gorgeous stage pictures lends the political, archetypal material an element of the uncanny that keeps the show mysterious. Much like Wilson’s production, director Max Truax heavily edits the source material and plays with gender deconstruction, repetition and fragmentation—Hamlet here is played by three actors and Ophelia by two, embodying the alienation in the main character of both ur-texts. No theater company in Chicago can combine madness and conceptualism better than Trap Door, and “Hamletmachine” is a near-perfect vehicle to showcase their genius. (Monica Westin)