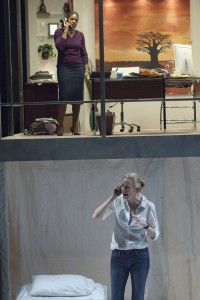 Human rights activists use the “Never Again” rally cry when it comes to genocide. But it has happened again: in Bosnia, in Rwanda, and now in the northern regions of the Sudan. Winter Miller’s “In Darfur” attempts to break down the conflict’s complicated politics and put a face on the tragedy.

Journalist Maryka (Kelli Simpkins) needs proof to put Darfur’s genocide on the front page. She finds it in Hawa (Mildred Marie Langford), a local who has been raped. Maryka publishes her story against the wishes of doctor Carlos (Gregory Isaac), creating violent repercussions.

Langford is a revelation; she nails her character’s humanity. Simpkins and Isaac show the longing and frustration of those forced to stand by and watch. But the star of the show is the multimedia set; Amanda Sweger’s set design and Mike Tutaj’s video and projection work give us the images we need to understand the unthinkable. (Lisa Buscani)