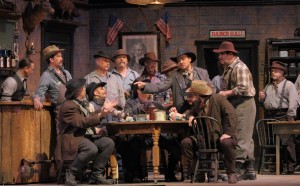 For those who think of Sergio Leone as having made the first “Spaghetti Westerns” in the mid-1960s, think again. More than half a century earlier, the Metropolitan Opera commissioned Giacomo Puccini to write a first-ever world premiere for the company that became a quirky Italian take on the American Old West.

Although an American subject had not been specified, Puccini’s previous opera, “Madama Butterfly,” had taken place in an exotic locale (Japan) with an American character who even struck up notes of the National Anthem in an aria. Puccini went to the same American playwright as “Butterfly,” David Blasko, and adapted his “Girl of the Golden West,” a reference to California in the days of gold fever.

Written by a composer best known for his melodies, “La fanciulla del West” has not enjoyed the same popularity of other Puccini operas precisely because what arias are there in this work, are contained within an expansive harmonic vocabulary that is the closest to Puccini’s own time of all of his works. Puccini was, after all, a twentieth-century composer still writing in a nineteenth-century style, though “Fanciulla” is his first work to give a sonic taste of his own century despite it being set in 1850.

The rarely heard work is best known today for a bizarre lawsuit that was filed by Puccini’s heirs against Andrew Lloyd Webber in the wake of the success of “Phantom of the Opera” where they contended that Lloyd Webber had plagiarized part of Act I’s “Quello che tacete”—ironically, one of the least-memorable tunes of the opera—in “Music of the Night.” The case never got to court, yet remains fodder for folklore in the opera world despite the irony that Puccini always “borrowed” liberally from others: in the case of “Fanciulla,” strikingly so from Debussy, Ravel, Wagner and Richard Strauss.

Pierre Boulez put it best in describing the dilemma of every composer: “We are all predators,” but the problem is compounded when composers chose to write commercially in blatant melodic tonality (i.e., both Puccini and Lloyd Webber) as there are only seven notes in a diatonic scale, and only so many ways they can be arranged. As such, bits and pieces of virtually any melody can be said to bear a resemblance to any another in the ear of imaginative beholders. 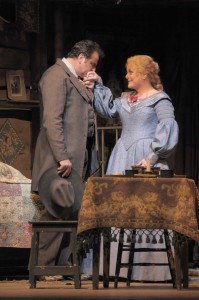 The reason for reviving “Fanciulla” now is that the piece is celebrating its centennial and Lyric Opera’s production follows so closely on the heels of the Met’s own anniversary production, with two of the same principals, that it was possible to see reruns of the Met’s HD broadcast at theaters the same week as this production opened.

This is Deborah Voigt’s second Puccini heroine here, though “Fanciulla” is far better suited to her vocal and dramatic talents than “Tosca.” Voigt’s instrument has become somewhat steely since her celebrated weight-loss surgery but she can still belt out with the best of them, an important point in having to project over Puccini’s largest orchestra, sounding glorious under Sir Andrew Davis.

There are no horses in this production (Puccini called for nine), but the heroine does sport guns, which she pops off several times during the show, and the climactic rescue of her love interest is accomplished in a vaudeville-like manner.

But what does make this production particularly worthwhile is the chemistry between Voigt and Italian tenor Marcello Giordani; not only do they look and sound great together, but we are convinced that they are really in love which does make us care what happens to them.

Giordani nearly stole the show with his tender and clarion rendition of Act III’s “Ch’ella mì creda libero” but all of the work, such as it is, is well served here. Though initially not heard well in the first act on opening night, Italian baritone Marco Vratogna as Sheriff Jack Rance did manage to settle in during Act II and was radiant by Act III. (Dennis Polkow)