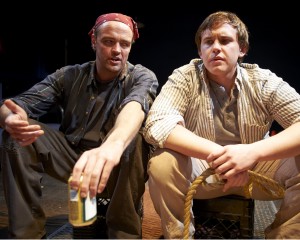 David Mamet actually worked on a Great Lakes freighter a few years before penning one of his first plays, “Lakeboat,” in 1970 (though later revised for production in 1980), resulting in a visceral treat, short on plot but long on character and colorful dialogue. A young college student gets a summer job aboard the “T. Harrison,” replacing a nightman whose fate will be a recurring and evolving discussion over the course of this journey. With an all-male cast feasting on the play’s unbridled testosterone, Steep Theatre’s production is a perfect showcase for why this shoestring company is so highly regarded. The simplicity of Dan Stratton’s set—a gangway of sorts divides the theater lengthwise, with audience members sitting just two aisles deep on each side—belies its ingenuity. By putting us so close to the action, the visceral qualities of the dialogue and performances are almost literally in your face. G.J. Cederquist directs a uniformly topnotch ensemble with appropriate pacing and brio, but I was especially captivated by the complexity of Sean Bolger’s performance; Eric Roach’s (Fred) vivid reenactment of his loss of virginity recalls and even exceeds Meg Ryan’s legendary scene in “When Harry Met Sally.” (Brian Hieggelke)