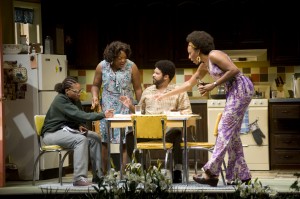 Regina Taylor’s new “Trinity River Plays,” the Goodman co-production with the Dallas Theater Center, is a sprawling, ambitious piece of drama. Spanning seventeen years in the lives of two generations of four Dallas women and the men who, for better or for worse, help to define them, it is a story about home and its magnetic and repulsive qualities, escape, return and renewal.

The central character, Iris, begins in the first play as an awkward teenager with ambitions of living in New York and becoming a writer. On her seventeenth birthday, she loses her innocence in an event that will inform the rest of her life. The second play finds Iris returning home as a successful yet divorced 34-year-old writer to discover a secret held by her strong and independent mother. As foils, Iris’ Aunt Daisy and cousin Jasmine have problems that are both their own as well as intertwined with the rest. Painful secrets abound in these plays, and the confrontations with each of them snowball exhaustively.

Though it seems a bit of a stretch to call these three individual plays, as narratively and thematically linked as they are, the three-hour-plus running time certainly supports the designation. Emotional fatigue might be an issue were it not for the powerful performances by the cast, with particular notice for Karen Aldridge as Iris and Penny Johnson Jerald as her mother Rose, who balance the painful explorations of the play with a graceful levity. In the end, the playwright simply tries to address too many of Life’s Big Questions in a single evening. But for the lack of focus, the plays—which really should be a play—would rise to Taylor’s undeniable talent and ambition. (Neal Ryan Shaw)