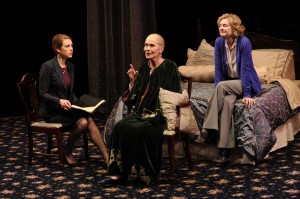 “Three Tall Women” is widely understood to be Edward Albee’s most personal play, which he himself referred to as a “kind of exorcism”—it revolves around the somewhat dismal life of a strong, prejudiced, self-interested woman based on Albee’s mother, for whom Albee clearly feels little sympathy. The play portrays the tall woman at three stages in her life: regal, difficult and somewhat demented in old age, bitter in middle age, and optimistic, bright-eyed and confident in youth. Through a surreal, heightened interview among each version of the woman on the oldest’s deathbed, “Three Tall Women” comprises a hard, bleak study of the loss of innocence, the grief of being estranged from family, the endless torture of an unhappy marriage. And it’s often very funny and sometimes very wise about the delusions of youth and unavoidable tragedies of aging. But there’s an element of empathy in the play missing, which results in a lack of real dramatic tension, despite Charles Newell’s direction of the three female actors, Mary Beth Fisher in particular, in remarkably intricate and moving performances. The play is limited to the perspective of a scarred and complex, but to put it bluntly, ultimately a gold-digging, unsympathetic character. While the first half zings with one-liners and occasional moments of profundity, there’s no engine in the second act, no emotional investment that can motor us through an hour of revelations and despair. The production will and should garner positive reviews for its strong performances and beautiful technical theater, but I remain unsold on the play itself. (Monica Westin)