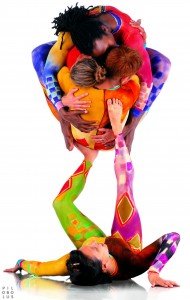 Imitation is the foundation of childhood play. As soon as we humans gain mastery of our limbs we begin to mimic the movements of the other humans and animals we encounter. As imagination develops that mimicry becomes transformation (Mom! I’m not Sharon, I’m a sea otter. Watch this!); our heroes are people that have the physical capabilities of animals or are endowed with superhuman strength or the ability to change shape. The gymnasts, dancers and acrobats in Pilobolus seem to possess all of the above and use them to create eye-popping displays of transformation. Pilobolus isn’t all AP charades, but it’s the shadow theater and skeleton-defying transmogrifications that made them a household name; remember the 2007 Oscars, when they tumbled together behind a scrim to form waddling penguins, the James Bond gun and the shoe on the Devil Wears Prada poster? A higher-brow example is the TED performance of “Symbiosis” in which the dancers appear to locomote via pseudopodia, flowing together and apart like paramecium in courtship before evolving into more complex life forms.

The upcoming program at the Harris is a mix of shadow theater, lighthearted numbers and more serious pieces spanning the company’s forty-year history. Artistic Associate Director Renee Jaworski said Pilobolus performances are tailored to each city in the interest of giving audiences both something new and a taste of the familiar. Some of the new on this program is “Rushes,” a 2007 collaboration with Israeli choreographers Inbal Pinto and Avshalom Pollak. Pinto and Pollak’s highly theatrical style would seem an effortless pairing with Pilobolus, but Jaworski said the collaboration created a good deal of productive tension. “Inbal and Avshalom work on the details and make the big picture from there. We focused on the same things, but did them in the opposite orders. That caused a tension in the studio, but it made for an interesting work dynamic and an interesting piece at the end.” Pilobolus, having worked with artists from pretty much every imaginable discipline, from graphic novelist Art Spiegelman to Steven Banks, the lead writer for SpongeBob, is practiced at turning challenging collaborations into eye-pleasing performances.

Older works on the program include a revival of “Duet” from 1992, an intimate work for two women and “Walklyndon,” their 1971 nod to vaudeville. (Sharon Hoyer)