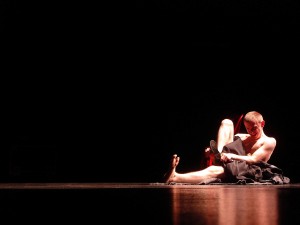 I turned on the mayoral debates before heading over to the theater tonight, not as some premeditated act, though it proved more meaningful than I realized. For I followed this short sampling of what we call “political theater” with the real thing, making for a night that made me really appreciate our ability to wage a war of words over, say, parking-meter contracts. For if you want to see theater that really makes a difference, and that puts the lie to “art for art’s sake,” you will never have a better chance to do so. Belarus Free Theatre is—since a time of political unrest against the nation’s dictatorial regime erupting in December when two of its members were arrested in its home base of Minsk and the rest of the company went underground to avoid imprisonment—truly acting for its life. It managed to escape to New York, where it had been previously booked to perform “Being Harold Pinter” in a festival, but then what? To return home meant certain arrest. In an act of magnificent compassion, The Goodman Theatre, along with Northwestern University, Chicago Shakespeare Theater and the League of Chicago Theatres, with the support of private donors, stepped up and offered to create a month-long home for them in Chicago in order that they might figure out what to do next.

Knowing this makes it pretty hard to offer an objective read on their production, frankly. It’s a bit like sending a food critic to the Last Supper; you’d have to be a pretty cold-hearted SOB to pan the show. With that caveat, however, it’s a really terrific piece of experimentally tinged theater. 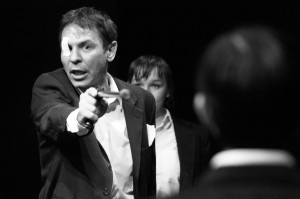 The production does present challenges: it’s performed in Russian and Belarusian, with translations projected clearly on a screen behind the actors. They speak very fast compared with other productions I’ve seen in translation, so it’s tough to read everything and watch the stage action at once. The Pinter pause has never been so welcome. But that’s less a quibble than a preparatory note; in fact, it would be disappointing to hear it in any but its native tongue, since one of the acts of repression visited upon the Belarusian people over the years has been an attempt to extinguish the language. “Being Harold Pinter” is an eighty-five minute mashup of Pinter writings, including plays and speeches, along with texts from Belarusian political prisoners, all rendered with passion and theatrical precision. Though I knew some of the Pinter being quoted, much I did not and it was part of the appeal for me to see how much his political work seemed to be a direct comment on the situation faced in this country: I was never sure where Pinter ended and Belarusian Free Theatre began. Vladimir Scherban, the adapter and director, deploys a minimal stage—four chairs in the corner, a cast in black and white, and a cane in the middle to start, with simple props added throughout to great visual and emotional effect. (You’ll squirm in empathy at one torture scene and you’ll never forget the devastating effect that a heel on an apple can have in another.)

I like to believe that this would be powerful, compelling theater even if this text were performed, say, by a Chicago company safely decamped in one of the city’s storefronts, where political risk means the danger of a building-code violation or something. But I cannot fully comprehend, frankly, the full power and meaning of seeing the work done by those who, by virtue of their performance, are not just actors on the stage, but actors in the reality they are portraying. The bar for political theater just got raised to an impossible high. (Brian Hieggelke)