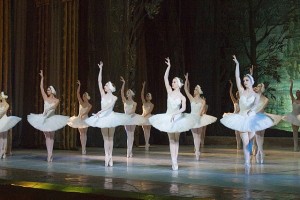 Will the recent release of Darren Aronofsky’s menacing ballet thriller slash horror film prompt audiences to, um, flock to see the ballet that served as the film’s narrative framework? Hard to say, but the State Ballet Theatre of Russia is certainly timely taking this one on the road. It’s the St. Petersburg-based company’s second time in Chicago (the last was their 2006 production of Cinderella), performing Russian ballet in the time-honored tradition. Meaning you won’t see a drop of blood or glimpse the guts of art-making so literally imagined in “Black Swan,” but you will see the gleaming product of a quest for perfection: ranks of weightless ballerinas slicing through footwork with surgeon-like precision, leg extensions high enough to change a light bulb and a cast of sixty-five moving with one mind. (Sharon Hoyer)