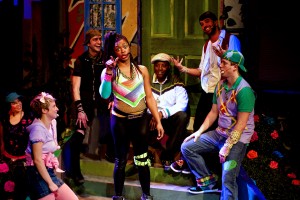 What what! Don Pedro, Benedick, Claudio and Don John are in the hizouse! Leonato’s house that is. Having just wrapped up a successful nationwide tour slaying whack MCs left and right, these hip-hop soldiers are laying up in their old friend Leo’s crib for some R&R when Claudio falls for Leo’s fine but ditzy daughter Hero. A dope wedding is planned until that ol’ dirty bastard Don John decides to funk it up. Meanwhile Benedick and Hero’s sassy cousin Beatrice drop pun-filled disses on each other in a rap battle of the sexes. Co-creators and directors The Q Brothers call it a “hip-hoptation”—“mixing Big Pun with Shakespeare.” And though their lyrical rhythms are more reminiscent of the Beastie Boys or Too Short, they know their way around the Bard’s tale and this cast knows how to keep it funky (and fresh) with a frenetic, infectious energy backed up by the wicked beats of DJ Adrienne Sanchez. Word. (Zach Freeman)