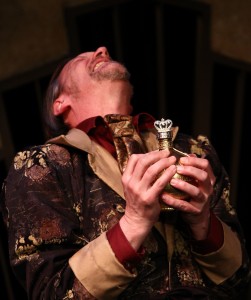 With Bernie Madoff in jail and Americans chomping at the bit to tar and feather the rest of the Wall Street hoodlums who put the country in its current economic mess, Ben Jonson’s fable about the pitfalls of greed proves timely. Making City Lit’s take on the play clear is its 1920s Art Deco production design, no doubt intended to echo the era leading up to America’s first financial crisis. Never mind that the play is set in Venice.

Don Bender plays the wily fox of the title, who with the assistance of his servant Mosca dupes Venice’s greediest citizens into believing he is deathly ill and giving him bribes in return for the top spot in his will. Bender proves a competent master of the language, but his deliberateness with the text encapsulates a show-wide easygoing pace that tends to undermine the comedy. Eric Damon Smith stands out as the slimy Mosca, and original music by Kingsley Day reinterprets Jonson’s songs as pleasant jazz interludes throughout this production that simply forgets to be a satire. (Neal Ryan Shaw)