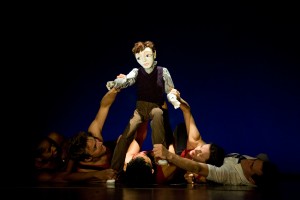 Compassionate and with gentle humor, Joe Goode’s dance theater is distinguished by a humanity both wonderful and rare. This weekend his San Francisco-based performance group brings two works to Chicago: “Wonderboy,” about the fears and desires of an exceptionally empathetic puppet, and “29 Effeminate Gestures,” a solo work incorporating verbal riffs and power tools. He spoke with me via phone about the performance.

What inspired you to incorporate puppetry into your choreography?

I’ve never been attracted to puppetry; I’ve been a bit of a puppophobe. I met Basil Twist and he enticed me to choreograph a moment in a show of his. The puppets were so transformative, they had so much character and Basil and I decided we wanted to do something together. We thought it would be fun to make a puppet the central character in a dance drama. We came up with Wonderboy, whose superpower is that he’s very sensitive and fragile and able to feel things in a very profound way, and while that makes it difficult for him to live in the world, it gives him great insight and sympathy. This is a not very hidden metaphor for the queer child—a boy who has great sensitivity, but it isn’t valued if he’s not sportsmanlike or athletic. Finding a way to bring that into one’s life as an asset is kind of the story of the artist.

It resounds with the statement you make about wanting to expose vulnerability and work on a human scale. In this case you’re working on a smaller-than-human scale.

Exactly. There’s something kind of neutral about a puppet. You can apply your own story and drama to it; it allows people to get into a very personal space with the subject matter. If it’s a person on stage, it’s his story. Somehow the puppet allows you to own it and think, “This is my human drama. I’ve suffered from being different, I’ve felt weak and vulnerable.” 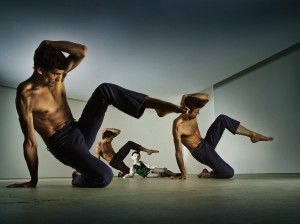 Was it challenging to have your dancers manipulating a puppet on stage?

It was very challenging. Basil studied in Japan for many years and this style of puppetry is Bunraku, which takes three people to operate a puppet three-feet tall. It’s very difficult; the dancers are on their knees and crouched over in very un-dancerlike positions. Basil said something very wise in the process. He said the puppet has a personality and an intention in each scene. You have to stop worrying about the mechanics and think about his intention and your hands will just sort of do it. After that we had a transformation in the rehearsal process. It got to the point in rehearsal where I would say “I think Wonderboy should be over here doing this,” and the dancers would say, “Oh no, Wonderboy doesn’t want to be there. He feels like he needs to be here.” They started to treat him like a character.

All I know about “29 Effeminate Gestures” is that it involves a chainsaw.

It does involve a chainsaw. It’s a signature piece I made in the eighties about the fear and loathing we all feel about things effeminate. I wanted to make a purely gestural piece and I discovered when I was working on it that many of the gestures seemed lavish and effeminate. I thought, oh gosh, I didn’t know that about myself, I don’t think of myself that way. And then I realized, there’s your piece, there’s your point of risk. That was an important work for me early on; it brought international attention. This is the first time anyone but me has done it. It’s fantastic to see Melecio Estrella make it his own. I feel honored by his version of it.

Gesture is so personal it must take on a completely different life.

Oh absolutely. And it was a threshold for me to walk through to admit that these effeminate gestures were in me somewhere, even though they had been squelched and denied and rejected. That basically I had killed that little boy, who had the capability of being lavish and effusive physically, that I had denuded him. It was very sad and very personal to admit all that. And then to see someone do it and make it personal, it’s really pretty great.

When you were making personal discoveries about the freedom you suffocated as a child, did you find your everyday gestures changing?

I’d like to say yes, that I somehow liberated the effeminate child, but the training happened at such a young age. I remember being bullied for the way I walked and placing my hands on the sides of my thighs so my arms wouldn’t swing too flamboyantly. I was doing this at age 7 or 8. When you reroute yourself at that young age, it’s like a lefty being forced to write with the right hand: it’s hard to get it back. I’d say in my everyday life, not so much. It’s not just my story; it’s the story of many people. I’ve had many people—straight, gay, male and female—say after seeing the piece that they felt they had robbed themselves of their natural expressivity. Effeminate gestures aren’t particularly acceptable for anyone; they’re considered a sign of weakness and superfluity.

Dolls so transformative is the figure of the life of a theater.