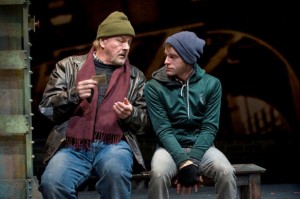 Brett Neveu’s second commission from the Writers’ Theatre follows in a long line of “one last big score” con stories, in which a scam artist decides to risk everything on one final, usually epic, con before leaving the game for good. What sets Neveu’s apart is an intimately drawn father-son relationship that anchors the double-dealings.

Sam and Eddie Sisson are a father-and-son pair of grifters who pull small hustles all over an unnamed Midwestern city. On the verge of his eighteenth birthday, Eddie feels he’s ready to strike out on his own, but his father feels otherwise. They agree to do one final con, but its consequences could be greater than a fat payday.

The play’s cons, which were perfected with the help of magician Dennis Watkins, are fun to watch unfold, but the real value of this production, the true mark of good theater, is the human element. Francis Guinan and Patrick Andrews are compelling as the Elder and Younger Sisson. In supporting roles, Joe Miñoso creates memorable, multiple marks for the hustlers to dupe, and Karen Janes Woditsch turns in a heartbreaking performance as Eddie’s drug-addicted mother. (Neal Ryan Shaw)