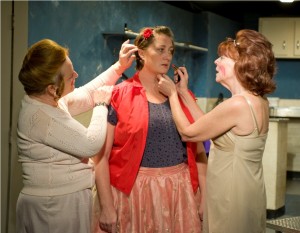 Cliché tells us that “It is better to have loved and lost than to never have loved at all.” Within the confines of an austere and slightly claustrophobic apartment, Breda (Kate Buddeke) and Clara (Laurie Larson) are two aging Irish sisters who would beg to differ. In the strangely hypnotic language of playwright Enda Walsh the sisters paint a bleak picture of the outside world to the slightly younger Ada (Kirsten Fitzgerald) by repeatedly recounting a troubled nightclub experience from years earlier that has colored their entire view of the world. Patsy (Guy Van Swearingen), a lonely fishmonger, stops by occasionally to deliver fish and soliloquize. Walsh’s words are not easily interpreted and almost appear nonsensical until the story begins to take shape. Director Robin Witt has a powerful cast that manages to draw out the subtle comedy amidst the dark discussions. It’s certainly not light entertainment, but the unexpected emotional wallop is worth the wait. (Zach Freeman)

Wow, mine must be an outlier’s view given the effusive reviews for this work! I’m just plain old fashioned enough in believing that a playwright should construct a dramatic narrative through the dialogue and action of characters catalyzed by their relationships, back stories and motivation. Instead, Mr. Walsh oh-so cleverly opens up a cannonade of long, drawn out dialogue-less speeches that overwhelms one’s short term memory while trying to divine what the hell is going on. “To act” means to take action and there is precious little of it in bringing these characters to life other than to have them… Read more »