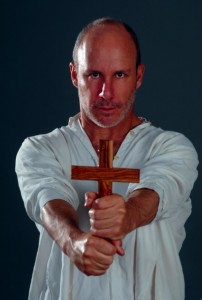 Every religion has blood on its hands, backed by zealous governments. Look at Henry the Eighth’s treatment of Catholics or France’s dealings with Protestants. “Conviction” looks at the Spanish monarchy’s persecution of Jews during the Spanish Inquisition, backed by the Catholic Church.

Father Andres Gonzales (Ami Dayan) attempts to stop townspeople from killing local Jews. Instead, he meets Isabel, a beautiful Jewish woman who reminds him of his past: he’s a converso, a converted Jew who trained as a Catholic priest. She entreats him to return to his Jewish roots; on pain of death, he complies.

It’s an interesting premise, but Oren Neeman’s strident script lacks the charm necessary to enable us to root for the protagonist; the dialogue’s stilted and there’s a great deal of hackneyed exposition. Sole performer Dayan does what he can with the occasionally purple prose. He’s likeable, but not enough to pull us through the story. (Lisa Buscani)