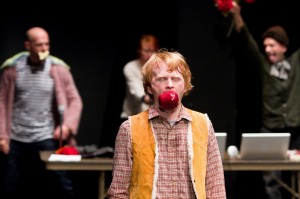 After twenty years collaborating in the internationally renowned performance ensemble Goat Island, one might expect the company’s co-founders Lin Hixson and Matthew Goulish to take a break; perhaps a nice, long vacation. On the contrary—just as Goat Island was embarking on the tour of its final performance, “The Lastmaker,” Hixson and Goulish were birthing a new company, incorporated in the fall of 2008. “Matthew and I wanted to continue our creative practice of making performances and all the activities that surround this process (writing, drawing, filmmaking, symposiums, teaching) after Goat Island,” explains Hixson. “We wanted…[to work] on a project-by-project basis to minimize the commitment artists would need to make to our company; collaborating with international artists as well as working locally; and supporting younger artists.” Thus was born Every house has a door—inspired, energetic and incredibly ambitious. The company embarked on its practice by creating not one, but three new works, developed in tandem over two years and across the globe; in Rio de Janeiro, in Croatia, and here in the couple’s hometown of Chicago. One of these pieces, “Let us think of these things always, let us speak of them never,” is a “theatrical quartet” starring Goulish, Stephen Fiehn of Chicago-based performance duo Cupola Bobber, and two collaborators from Zagreb, Croatia—actor Mislav Cavajda and dancer/choreographer Selma Banich—debuting in Chicago this week at the Museum of Contemporary Art.

“’Let us think of these things’… is a wonderfully interesting piece,” says Peter Taub, Director of Performance Programs at the MCA, and longtime supporter of Hixson, Goulish and the entire Goat Island ensemble. “It is both playful and serious. It is shaped by the lived experience of seeking common ground with someone from another culture, as well as structured with rigorous conceptual framework.”

Writing this article in advance of the premiere and having yet to see the performance, I know better than to attempt a synopsis—especially after experiencing other work by these artists; always complex, layered, even delightfully confusing, challenging audiences to make their own meaning. Instead, I defer to the description from the company’s website: “Let us think of these things…” is “an encounter between Croatia and the US through responses to an unlikely, ‘equidistant’ third entity, Swedish filmmaker Ingmar Bergman. Yugoslavian responses to Bergman, derived from the work of Dusan Makavejev (“Sweet Movie”), and American responses to Bergman (and Makavejev) extracted from philosopher Stanley Cavell, provide the foundation for a theatrical work that engages in the histories of utopianism and revulsion/revolt in an unjust world. Film becomes a basis for choreography, a catalogue of abandoned practices offers a degree of humor, and theater frames an encounter of difference in the delicacy of the present.” 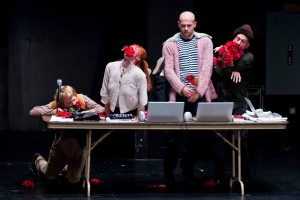 Appearing in conjunction with the performances is a gallery installation and screening of work by Chicago filmmaker Melika Bass, resident in the MCA’s UBS 12 x 12 New Artists/New Work series. Included in the larger exhibit is the twenty-five-minute film “Waking Things,” written and directed by Bass; it stars the performers from”Let us think of these things…” and was developed over two years of observing the development process of that piece. The filmmaker describes it “as a parallel universe parable…attempt[ing] to extend [the company’s] work into new directions, while expanding the bounds of contemporary experimental narrative film.” The “quasi-medieval period piece” was shot in and around Chicago. “I sat in on rehearsals…freely ‘sketching’ with the video camera as they rehearsed,” continues Bass, who has a background in dance and theater, with extensive recent experience working with non-actors in her films. “From this I discovered single gestures, postures, situations and framings that I lifted out of the performance…and then placed them in completely new ways in a separate, fictional world of the film.”

It is this forward-thinking, constant exploration and experimentation with “the new” that defines Hixson’s and Goulish’s work over the past twenty years, both with Goat Island and Every house—perhaps as much as their long established and widely adopted, rigorous pedagogy and methodology, deeply grounded in the gathering and dissecting of a wide range of source material from music, literature, science, art, history and technology. As Goulish detailed in a recent lecture,“Every house evolved from a decision to push the practices and aesthetics of that work into a differently challenging direction; to retain the diligent structure and presentation, and the disciplined work habits, but to broaden the canvas to include the prospect of invitational intercultural collaboration, and its unfamiliar, even awkward, spectrum.” Contrary to the work’s title, I suspect Chicago audiences will have a lot to talk about.

February 9-13 at the Museum of Contemporary Art, 220 East Chicago, (312)397-4010,mcachicago.org. A post-show discussion follows the opening-night performance, as well as a symposium on Saturday, February 12.