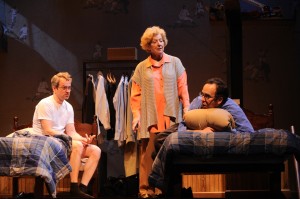 This world-premiere play by Victory Gardens ensemble playwright Joel Drake Johnson has a lot going for it, including managing to get some cutting-edge dark humor out of the increasingly popular phenomenon of middle-aged grown-ups returning to their parental nests, seeking to recapture the carefree and cocoon-like childhood existence that they think they remember when things become too tough in the real world.

The ninety-minute intermission-less play moves quite quickly, far too swiftly for the narrative arc that is set up in that characters end up pouring their hearts out before we really have had a chance to get to know them well enough to care enough. And while the sibling rivalry dialogue rings true, the mother (charmingly played by Mary Ann Thebus) in this case is far too wise, introspective and insightful, and the all-knowing daughter (Allison Torem) who comes to visit her dad fleeing from her sick mom (whom we never see) shatters credibility with astonishing guru-esque social skills and analytical abilities beyond that of Dr. Phil and Yoda put together.

And yet, if this is viewed as a work-in-progress, Johnson is onto something. He could keep the same overall storyline and even the same climactic shifts, but flesh out the scenario to something more substantial. The work ironically seemed to cry out for the need to get out of the boys’ room. Are we really to believe, for instance, that Ron (Joe Dempsey) is a successful dentist and had a happy marriage before coming home to Mom? He comes across as such a jerk to his Mom and younger brother (Steve Key), that he would be far more interesting if we actually experienced him operating in the “real world” (via phone calls? a middle act in his office or back home?) so that we can see that his journey home and returning to familiar and destructive juvenile patterns are only one part of his world. As is, it is the only corner of his world that we see. (Dennis Polkow)