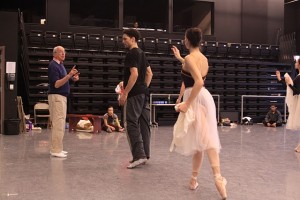 The first time a ballet company rehearses in costume, particularly if those costumes are lavish, late-nineteenth-century evening dress, is a great day to be a fly on the studio wall. While tugging at bustiers, flourishing capes, flashing garters to the mirror and general horsing around with top hats and canes, the dancers begin to truly inhabit their characters. And character provides the fluttering heartbeat of the Joffrey’s current production: Ronald Hynd’s 1975 comic ballet “The Merry Widow.” It’s a company premiere for the Joffrey, who have had the fortune to work with John Meehan, the principal dancer in the original production, and now the 80-year-old Hynd in the week before opening night.

The story originated as a turn-of-the-century operetta by Austro-Hungarian composer Franz Lehar. The action, comprised of intertwining romances, flirtations, infidelities and jealousy-fueled fisticuffs seems as ripe for adaptation into theater or a Jean Renoir film as an evening-length ballet. I sat in on a rehearsal of Act III, when the multiple storylines established in the first two acts intersect at a grand ball and comedic chaos ensues. Hynd’s translation of comedy of manners into formal choreography is remarkably nimble and spirited; he carries on a witty physical conversation with the score (adapted from the original by John Lanchbery), so the dancers move directly to the whims and moods of the music, performing their lighthearted farce like marionettes. Principals, along with a few peripheral characters, get to indulge in some carefully timed pantomime and a few are quite gifted physical actors—the padded maitre d’ in particular, who bustles about at the opening of the act abusing waiters and fawning over esteemed guests like this was his true calling. 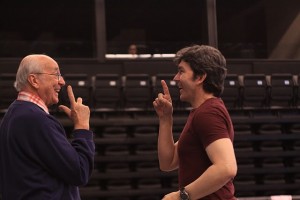 Hynd’s gift for choreographing gesture is belied in the moments he stops the company to give direction; his hands are lively and punctuate each correction—not the hands of your workaday octogenarian. He must stop the rehearsal rather frequently to correct timing—the tapestry of this act is so precisely woven that should one dancer be off by half a beat, the entire thing unravels. Hynd’s ballet is a charming, whimsical story to lift the end-of-winter blues. (Sharon Hoyer)