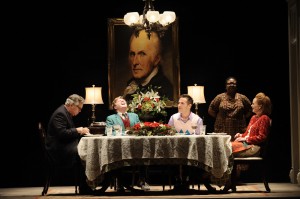 It took me a while to decide if I loved or hated Thomas Bradshaw’s “Mary,” in its world-premiere production at the Goodman Theatre. I decided on the former, in large part because of the very fact that it created this quandary for me—I like plays that provoke—but if you go with the latter, I won’t argue with you. It is, I suspect, that polarizing. Plato must be spinning in his cave.

On its surface, it’s a whimsical campy sendup of racism and homophobia, set mostly in the about-to-be-AIDS-plagued eighties, when a Wham!-loving young music student brings his flamboyant boyfriend home to meet his clueless parents who live on the remnants of a plantation that’s been in the family since long before “The War of Northern Aggression” and retain, to an absurd degree, a racial attitude circa 1835. Mary is the family’s virtual house slave, an illiterate, content and virtually uncompensated servant cut from the “mammy” mold. Take this ludicrous situation, and add in penis enlargers, Cabbage Patch dolls and a disco-fied dance scene—yes, they vogue to Madonna—and you’ll start to wonder why you’re not catching this show in the back room of a Boys Town club. It won’t be long, right, before racism and homophobia give way to one big we-are-the-world family, as if Charles Busch made an after-school special.

Or so it seems. But we live in a world that can elect Barack Obama president and yet still listen to Glenn Beck, one where the progressive spirit of America, expressed in a long arc from independence through the Great Society, can be, it seems to some of us, giving way to those who would thrust us backwards into a modern-day Dark Age. For Bradshaw, ignorance is the enemy, and for all the progress we make, the one great promoter of ignorance, religion, remains mostly unchallenged in its hegemony. And so, the ending of Mary is unexpectedly stunning. And yet, rings true.

The characters tend to archetype, as is so often the case with camp, and this ensemble does a fine job of delivering the performances required. So too does the direction of May Adrales never fail to leave a cheesy note unplayed for maximum humor. Kevin Depinet’s set, in the smaller Owen Theatre, is spare but efficient, especially in rendering a cartoon version of an antebellum mansion, complete with a colossal ancestral portrait that silently retains its grip on the characters who live among it.

You may find this play smug and condescending in the simplistic way it conveys ideas that seem so thoroughly dated that it feels like something you might have laughed at twenty years ago. And, especially, because the whole thing is basically a ninety-minute joke with a heckuva punch line at the end. Emphasis on punch. If you feel this way, I agree with you too. I told you I was conflicted. (Brian Hieggelke)