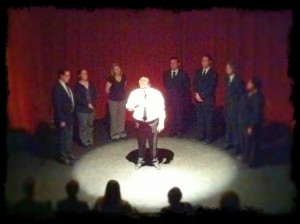 “No human being, when you understand his desires, is worthless, ” according to sci-fi maestro Orson Scott Card. WNEP makes a stab at understanding the worth of the recently departed in their remount of “Postmortem,” the improv-generated “living” obituary.

The format’s intriguing; each performance centers on a different obituary. The show’s construction staggers vignettes from the subject’s life with monologues about the period, complemented by an eclectic sound design. Humor isn’t the only goal here; drama has as much weight as the funny, which is refreshing.

Sunday’s crowd was small and the show was a tad subdued; the characters and stories could have been more fleshed out. But the ensemble’s efforts were still impressive. Matt Ulrich played a believable everyman as the evening’s subject (a veteran day trader); Regan Davis and Henri Dugas offered up some intriguing character work. It’ll be interesting to see where these lives go. (Lisa Buscani)