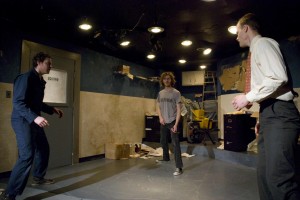 Sometimes returning home can be hard. Especially when your siblings greet you by bashing your knees with a crowbar. After three years away in LA, Rick (Christopher Chmelik) arrives at a trashed vacant office in his hometown for a violent game with his two brothers: the stoic Peter (Walter Briggs) and the goofily vacuous Kent (Ryan Bourque). Gory action viscerally personifies familial struggles, replacing subtle emotional sniping with a knee to the face. And the blood does flow. Especially after Rick’s employer, an aging Chuck Norris-type (Danny Goldring in a tour de force), shows up to join the melee. Much of Brett Neveu’s uber-dark, fast-paced script seems like a collection of secret rules and inside jokes, but director Duncan Riddell, along with his dynamic cast, gives the show a loose, flowing feel that makes you feel like you’re in on the jokes, even when you’re not quite sure what they are. (Zach Freeman)