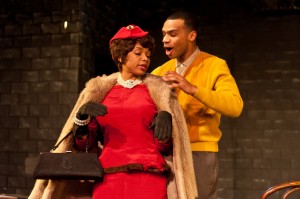 Alice Childress’ Obie Award-winning 1955 play looks at racial conflict in front of and behind the curtain of a new Broadway play. White and African-American actors bond and clash, with mixed results.

Wiletta (Velma Austin) lands a role in an “edgy” play that purports to confront racism. She takes young John (Armand Fields) under her wing, teaching him the tricks that veteran actors like Millie (Kelly Owens) and Sheldon (Cola Needham) use to survive “the man,” dismissive director Al (John Mossman).

The subject matter’s important but director Vaun Monroe doesn’t catch the show’s disconnects. Character transformations of John and ingénue Judy (Kimberly Chelf) are never explained; responses to prejudice start big and stay that way. Mossman’s condescension is so obvious that the third-act reveal of his racism is no surprise to anyone. The show has its highlights; Austin and Owens’ commiseration is fun to watch. But they can’t rise above the show’s head-scratching misses. (Lisa Buscani)