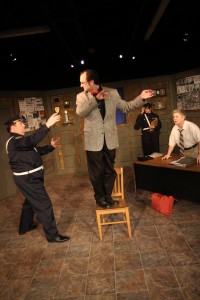 In 1969, Giuseppe Pinelli fell from the fourth story of a police station in Milan, Italy. An anarchist who was arrested in connection with a series of bombings, his death—or murder—inspired a wave of protest against an increasingly authoritarian government. Signal Ensemble stages a modern update of Dario Fo’s 1970 satire, which fictionalizes Pinelli’s death for its backstory. This cast of screwballs gives the lie to the inherent madness of a state struggling to retain power by any means necessary.

As the Madman who ends up impersonating the judge sent to investigate the death of the anarchist, Joseph Stearns deserves credit for never losing a beat in his character’s convoluted line of reasoning. Vincent Lonergan, Anthony Tournis and Eric Paskey are the police inspectors whose contorted attempts to avoid blame resemble Three Stooges bits. Simone Roos as a shrewd independent reporter and Elizabeth Bagby and Christopher M. Walsh as inept officers round out the cast. In the hands of director Anthony Ingram, Fo’s play often feels more like farce than satire, but, as with many great social commentaries, that difference is academic. (Neal Ryan Shaw)