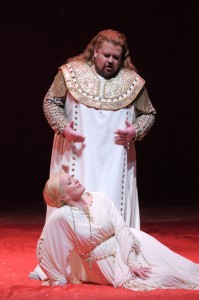 Clocking in at four-and-a-half-plus hours and taking thirty-plus years to get back to Lyric Opera, “Lohengrin” is once again riding in on a swan—or in this case, a projected swan silhouette—for a stunning evening of musical theater as only Wagner could provide it.

No, this is hardly the new production that was originally promised, but a truncated version of the colorless whitebox version seen here in 1980 with Eva Marton’s memorable Elsa and “staged” this time around in a static and at times, ridiculous manner. But no matter. Close your eyes and feast on the glorious sounds, a rare Chicago opportunity to savor Wagner’s sixth and last opera, per se, as the true Wagnerian revolution that would forever change music would commence in earnest with his next work, “Tristan und Isolde,” which would usher in the new art form that Wagner would dub music drama.

“Lohengrin” is a work with one foot each in opera and music drama: the characters are the most psychologically developed to that point, and the drama component is as important as the music, a rarity as of yet, and of course, the work has some of the finest choral singing of any opera. Pity that longtime Lyric chorus master Donald Palumbo never had a crack at “Lohengrin” in Chicago before the Met spirited him away from us, but current chorus master Donald Nally, who is retiring after this season, really pulled out all of the stops and had the Lyric Opera Chorus sounding their most glorious of his time here.

Unlike other Wagner works that Sir Andrew Davis has conducted here which by and large have been his first performances of those pieces, Davis actually made his Bayreuth Festival debut conducting “Lohengrin,” though the cast is actually stronger here. A couple of brass blurbs aside, the orchestra played luminously, especially during the finale and the tranquil sections, yet was no less convincing in the rousing portions: the familiar Act III prelude was taken at breakneck speed and was quite thrilling. Davis’ tempos were, by and large, far faster than usual for the piece, but he made a convincing case for them and, for Wagner lovers in a hurry, it does bring what can be a five-hour evening down a bit. (Yes, the box lunches/dinners are back during the first intermission.) 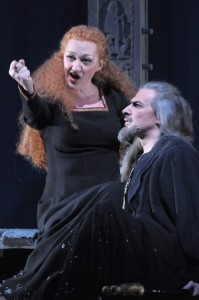 True, we only get a token Wagner work every election cycle or so, but kudos to Lyric that when it does happen to make it count in a big way and get the best Wagnerian cast that it is currently possible to assemble.

It has been twelve years since South African tenor Johan Botha last appeared here in Italianate repertoire, and even then, many of us could hear that he had the perfect instrument to take on Wagner: a bright, robust tenor sound with power to match. Wisely, Botha has been careful and has taken his time with performing that tenor-killing repertoire and has returned to us a master heldentenor. Botha’s is a powerful voice, to be sure, but it is also a beautiful voice, that rarest and most coveted of combinations in the tightrope-walking world of the tenor voice. Lohengrin has become Botha’s signature role, and he is magnificent in it.

Thankfully, soprano Emily Magee’s Elsa is able to stand up to him vocally, but this is a truly luxurious cast where even the Herald (baritone Lester Lynch) is wonderful. German mezzo-soprano Michaela Schuster brings a deliciously low timbre to Ortrud and bass-baritone Greer Grimsley is her dark partner in crime while German bass Georg Zeppenfeld brings heft and beauty to the role of King Heinrich.

The Wagnerian drought returns next month for an unspecified number of years, so act quickly to experience this extraordinary production, the finest heard at Lyric in years. And being the culmination of Wager’s ideas before heading off into his revolutionary world, “Lohengrin” is an easily accessible and perfect one-stop work to see what all the fuss is about when it comes to Wagner. (Dennis Polkow)