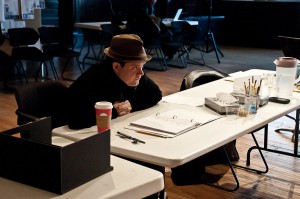 I first encountered Mat Smart’s theater at this year’s VisionFest, LiveWire Theatre’s short-play festival. Smart’s ten-minute play “A Sudden Fluke of Physics”—about a young couple in the moments following a bad car accident— was deceptively simple, and its raw thematic material of romantic love and its quiet heroisms could all too easily have become mawkish. But it didn’t. Instead, it was both funny and heartening: what romantic comedy so often tries but fails to be.

“When did romantic comedy become a dirty word?” Joel Ewing, managing director of LiveWire muses. LiveWire will be producing a full-length play of Smart’s, “The 13th of Paris,” at the Greenhouse Theater this spring, a big step for the company, which recently changed its mission to solely doing world or, in this case, Chicago/Midwest premieres. Ewing, who will appear in the play, describes it in many of the same terms I would use to describe “Sudden Fluke”: funny, touching, romantic, kind, but with a subtle arsenal of ideas packed in. The hardest part of Ewing’s job recently has been describing the play without making it not sound like a standard romantic comedy; “The 13th of Paris” is about a young Chicago man who leaves his long-term girlfriend to go to Paris with his grandparents’ love letters and try to discover what his stable relationship might be missing. Once again, Ewing finds that Smart “has navigated to write a very honest and genuine look at modern love… that manages to avoid ‘all of that’ entirely”… “all of that” being the usual platitudes of romantic comedy.

Smart, co-founder of Slant Theatre Project in New York City, has made a name for himself writing plays that tackle questions of how we love: “A Bed the Size of Portugal”, “A Standing Long Jump.” But the playwright first began making plays about politics. “I found that a lot of people don’t care about politics in their theater,” Smart says laughing, “but everyone is interested in love stories… I like to think of plays like ’13th of Paris’ as romances and not romantic comedies. I just try not to make it cheesy, to keep it edgy a bit.” Is that line hard to walk? “I think it is. I think the only way to do it is just to try and fail, adjust things, and figure it out.”

He’s made yet another shift this month as he returns to Chicago—Smart is a Naperville native—for yet another Chicago premiere of his work, “Samuel J. and K.” at Steppenwolf Young Adult. The play, which had its world premiere at the Williamsburg Theatre Festival this summer, explores the relationship of two adopted brothers, one black and one white, as they confront racial identity while setting out on a trip to Cameroon to explore Samuel K.’s roots. “I think it is a bit of a departure for me,” Smart says, “because the plays of mine that have gotten out there are the ones that are about romantic love, and this one is more about the love between two brothers. It’s also my first full-length play with just two characters… so it is quite a bit different, in another way I think of it as a love story about these two brothers more than anything else.” In fact, the productions of Steppenwolf for Young Adults were one of the main reasons Smart went into theater—it’s a benchmark for the playwright who “never thought as a high-school student that I’d be writing a play.”

What’s next for Smart? “I want to write a new play, but the idea kind of scares me—I think it should always sort of feel like it’s something that scares you to go in.” It’s not hard to imagine how intimidating Smart’s projects are: taking romantic clichés and turning them back into novel and profoundly hopeful explorations.

“Samuel J. and K.” plays at Steppenwolf for Young Adults February 22 to March 13. “The 13th of Paris”plays at the Greenhouse Theater Center March 12 to April 17.