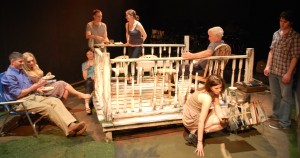 “Feet of Clay” is LASTmatch’s Southern Gothic response to “Three Sisters.” But that was then and this is now; Stephen Louis Grush’s script tries and fails to model Chekhov’s chronicle of loneliness.

The isolation doesn’t translate here; with social media, no one’s cut off from old loves or far-off places. Marriage isn’t the only option for today’s woman. Dying to live in New Orleans? Get on the bus, girl. The piece’s first half is weighed down with exposition, yet Sonny’s PTSD symptoms go unexplored, the family’s sense of privilege and its loss is undefined and a climactic murder goes undramatized. The truncated ending offers no real resolution. After all their heartache, those girls deserve one. (Lisa Buscani)