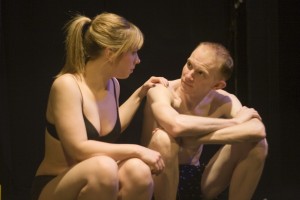 The four characters in Philip Stokes’ darkly minimalistic play begin stripping down within the opening minutes of the show. First comes literal stripping (down to underwear), shortly followed by emotional stripping, as each character gives a brief but disturbing account of their troubled life. Decidedly painful experiences are presented with an offhandedness bordering on glibness, but the cast, under the direction of Nathan Robbel, manages to uncover the torment hidden beneath the short language, even while evoking occasional laughter. The four have been somehow positively affected by a kind but shadowy figure named Marvin and there’s a sudden shift midway through from individual stories to a collective communication between the characters as they deal with the death of Marvin. This is a tough transition story-wise and I’m not convinced Stokes’ script is fully up to the task, but the actors make it work, finding honesty in the messy confusion of dealing with loss. (Zach Freeman)