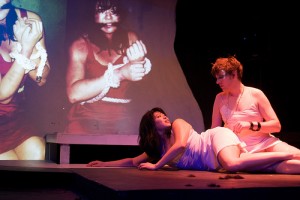 Adapted from Euripides’ “Iphigenia at Aulis, ” playwright Caridad Svich’s “Iphigenia…(a rave fable)” is a disorienting amalgam of plot points involving the title character, her (possibly?) incestuous relationship with her despotic general of a father, a hermaphroditic rock singer and a trio of dead drag queens. As Iphigenia wanders the streets of her unnamed country (well represented by the nicely stylized black and white of the set design by Steph Charaska), electronic and vaguely video-gamey music flows constantly through the inadequate sound system. There’s a multimedia aspect to the show that has promise but ultimately distracts from rather than enhances the clarity of the story. The blocking frequently feels lackadaisical and director Tony Adams would do well to pick up the pace throughout, as the stilted dialogue and unnecessarily lengthy pauses effectively kill any momentum the more exciting scenes might generate. Ultimately, though, it’s the disjointed script that does Iphigenia in. (Zach Freeman)