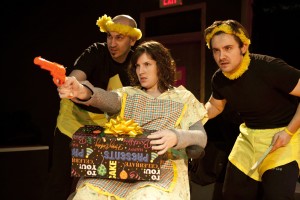 Anyone who was ever curious but hesitant to check out Collaboraction’s annual Sketchbook festival because of the marathon-length run time or the hit-or-miss nature of the lineup, which normally spans two nights in rep, would do well to consider attending “Reverb,” a greatest-hits collection of Sketchbook pieces from the previous decade of the festival’s history. While the eight short plays on the bill aren’t all winners, despite apparently having risen about the chaff, the brisk direction by artistic director Anthony Moseley keeps the ninety-minute production moving along. The highlights include “Deep Blue Sea,” a suspenseful, underwater love story; “The Lurker Radio Hour,” in which a dejected old-timey horror-story radio host searches for his runaway wife through the airwaves; “The Untimely Death of Adolf Hitler,” a wickedly smart and funny science-fiction alternate history; and “A Domestic Disturbance at Fat Little Charlie’s 7th Birthday Party,” an interactive comedy that cleverly epitomizes Collaboraction’s vision of unique experiments in theatrical experience. Music, video and visual art round out the diverse multimedia experience. (Neal Ryan Shaw)